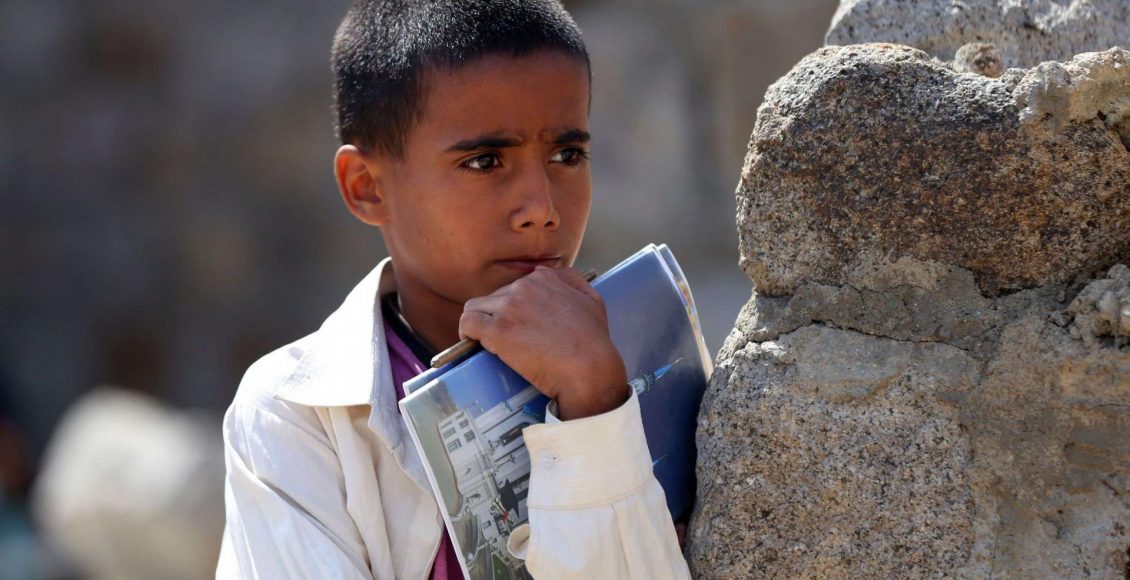 The extent of pain and catastrophe exceeds the situation caused by the US-Saudi aggression and its accompanying unfair siege on the reality of childhood in Yemen. This reality tells part of the suffering and humanitarian crises inflicted on Yemenis different segments and groups as a result of the unjust war imposed on them.

The reality of Yemeni children and the crimes and violations committed against them can only be described as “massacre,” according to human rights specialists. That is because the category of children are the most affected by the aggression and siege, including thousands of victims who were killed as a result of aerial, land and sea bombardment or as a result of the siege that killed children by starvation or disease.

Of the remaining children alive there are two types: the first is an orphan because of the loss of his father who was martyred, and the second lost the sense of childhood as his family is unable to give him what he needs as a result of the conditions of siege and starvation, these are nearly 90% of parents and children. While 10% of those who are still in good financial situations, their children also suffer from psychological conditions or loss of feeling of safety as a result of the continuing raids day and night. Neither the child’s school is safe nor his home.

In terms of figures, official authorities, including the Yemeni Ministry of Health, report that “5,400,000 Yemeni children” are malnourished, including “2,900,000 children” under the age of five, equivalent to 55% of children. While 30% of children are patients who need to travel for treatment, dozens of them have died. Some 7,516 children have been killed and wounded by direct bombardment by the aerial aggression. Besides, at least two million children are out of school, and the same number are displaced.

The shocking figures of the statistics of nearly 5 years of aggression on Yemen also reveal that one child dies every 10 minutes due to malnutrition, 6 newborns die every two hours due to the deterioration of health care services as a result of the blockade, while 65 of every 1000 children under five die by one of the epidemics. Of these, 2,200,000 children are infected with cholera, 3,750 of them died. In addition, 5,000 Yemeni children suffer from tumors every year as a result of the use of internationally prohibited weapons by the coalition of aggression, according to specialized monitoring centers, which show that more than 12 million children – almost every child – in Yemen are in need of urgent humanitarian assistance.

The aggression on Yemen has destroyed thousands of homes, schools and health facilities, increased food insecurity and caused water shortages that have led to outbreaks of disease and epidemics. All of these causes had a disastrous impact on the category of children that were most affected.

So the figures alone reveal the magnitude of the humanitarian catastrophe against childhood in Yemen, where human rights classifies crimes committed against Yemeni children among the three crimes defined by the Rome Statute of the International Criminal Court. Most crimes against children are war crimes, as war crimes are systematically practiced, they are crimes against humanity, which means that Saudi Arabia and its alliance have practiced against the children of Yemen without exception, the largest massacre in modern times with a green light and blessing and full international sponsorship.

International silence seemed shameful and flawed about the violations against Yemeni children. Credibility is absent  in the reports of the international organizations concerned in accurately describing this reality, providing the support that this tragic situation deserves, or playing the required role in the nature of the suffering. Moreover, these organizations, especially the United Nations organizations, do not adequately condemn the crimes committed against the children of Yemen and do not exert pressure to end them and bring the perpetrators to justice.  As if the world – all the world – does not hear the groaning of the children of Yemen and does not pay attention to their suffering, robbed innocent and violated rights.. Who would rescues them then? Who would save these forgotten lives and stop their aches? !!.

128 Captives of Yemeni Army Released and Return to Sana’a