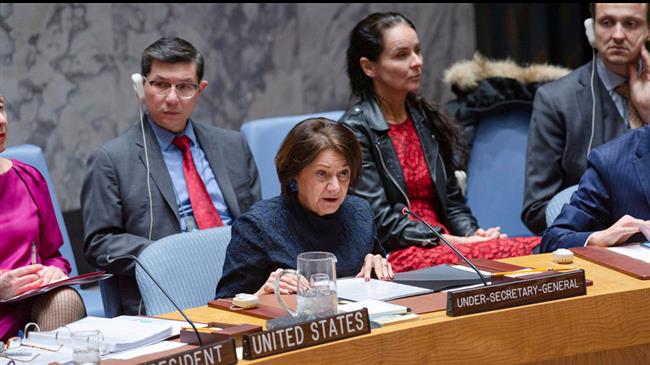 DiCarlo made remarks during a UN Security Council briefing on the eighth report of the Secretary General on the implementation of resolution 2231 which endorsed the Iran nuclear deal in 2015.

“At this time, we are unable to independently corroborate that the cruise missiles, or the recovered components we inspected, are of Iranian origin,” she said speaking of alleged missile debris related to the September 14 attack on the oil facilities.

“We have recently received confirmation that some of the cruise missile components were, in fact, not made by the identified manufacturers but could have been copies,” she added.

DiCarlo also said the Secretariat is “unable to independently corroborate” whether drones used in the operation were of “Iranian origin”.

The attacks, which successfully halved the Saudi kingdom’s oil production, were claimed by Yemen’s Houthi Ansarullah movement and were in response to Riyadh’s nearly five-year onslaught against the country.

The operation displayed a significant advancement in Yemeni military capabilities, successfully striking one of Riyadh’s most important and also most heavily protected assets.

Washington, however, which has provided the bulk of Saudi Arabia’s air defense systems, was quick to blame Iran following the attack without providing any conclusive evidence to back up its claims.

Washington’s allegations against Tehran came at a time when Saudi officials had said that they lacked enough information to identify the perpetrator of the attack.

Washington’s jump to blame Tehran for the attack came as the operation, conducted by Yemen’s ragtag military forces, was widely seen to be undermining the efficiency of Washington’s much-prized Patriot surface-to-air missile systems deployed in Saudi Arabia.

Two days following the attack, Russian President Vladimir Putin pointed to the utter failure of the US defense systems, mockingly suggesting that Saudis may be better off buying Russian-made missile defense systems.

On Thursday, Washington claimed that it had obtained new evidence blaming Iran for the attack.

A US report, cited by Reuters, said Washington “assessed that before hitting its targets, one of the drones traversed a location approximately 200 km to the northwest of the attack site”.

“This, in combination with the assessed 900 kilometer maximum range of the Unmanned Aerial Vehicle (UAV), indicates with high likelihood that the attack originated north of Abqaiq,” the report said, referring to the location of one of the oil facilities.

Speaking with Reuters, US Special Representative for Iran Brian Hook said the newly-declassified information proved that Iran was behind the operation.

“As many nations have concluded, there are no plausible alternatives to Iranian responsibility,” he said.

Hook’s comments come despite the fact that Washington’s own report stopped short of claiming that Iran was the origin of the attack.

“At this time, the US Intelligence Community has not identified any information from the recovered weapon systems used in the 14 September attacks on Saudi Arabia that definitively reveals an attack origin,” Reuters quoted the report as saying.

He also described US sanctions on Iran as being “economic terrorism” targeting ordinary people as well as different sectors of the Iranian economy.

Speaking on Thursday, DiCarlo also urged for the full and effective implementation of the Joint Comprehensive Plan of Action (JCPOA) to “secure tangible economic benefit to the Iranian people”.

“We therefore regret the withdrawal of the United States from the JCPOA in May 2018,” she added.

Washington reimposed economic sanctions which had been lifted under the deal after withdrawing from the deal last year.

“Certain actions taken by the United States, since its withdrawal from the Plan, are contrary to the goals of the Plan,” she said.

“The reimposition of its national sanctions lifted under the Plan, as well as its decision not to extend waivers for the trade in oil with Iran and certain non-proliferation projects, may also impede the ability of Iran and other Member States to implement the Plan and 2231,” she added.

The UN official said Iran has stated that the suspension of its JCPOA commitments in response to the failure of signatories of the JCPOA to uphold the agreement, “are reversible and that it intends to remain in the Plan”.

“In this regard, the recent decisions by Belgium, Denmark, Finland, the Netherlands, Sweden and Norway to also join the Instrument in Support of Trade Exchanges (INSTEX) are positive developments,” she added.

Community protests in Hodeidah held to condemn the aggression’s crimes

Zakharova: USA Has No Right to Control Fate of Other Countries