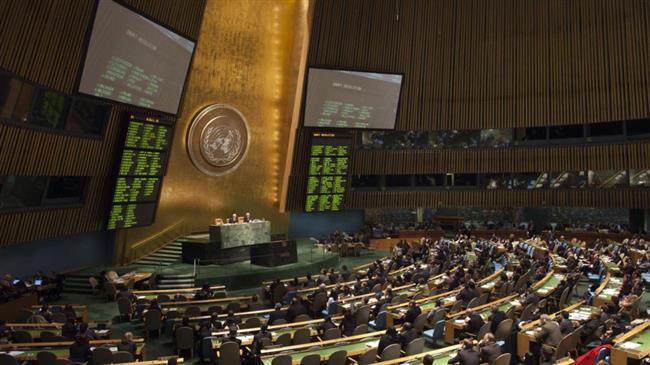 Religious minority lawmakers at the Iranian parliament have condemned a UN human rights resolution against Tehran, calling it a conspiracy hatched by the United States, Israel and their allies.
The resolution, sponsored by Canada, was passed at the UN General Assembly on December 18, accusing Iran of discriminating against women and religious minorities. Western states, along with Saudi Arabia and the United Arab Emirates, voted for it.

In a joint statement on Sunday, Assyrian, Jewish, Zoroastrian and Armenian Christian lawmakers denounced the resolution as “one-sided and spiteful,” saying it was in line with the US policy of pressuring Iran.

“Although the contents of the resolution appear to be about human rights, it is in essence a political statement and a pressure tool raised with specific strategic objectives against our country,” they said.
The signatories were MP Yunaten Bet Kelia, who represents the Assyrian and Chaldean communities in the Iranian parliament, Georgic Abramian and Karen Khanlari, who represent Armenian Christians, as well as Zoroastrian MP Esfandiar Ekhtiari and Jewish MP Siamak Moreh Sedgh.
“We, the representatives of religious minorities of the Islamic Consultative Assembly, strongly condemn this resolution for its instrumental use of human rights concepts and regard it as a one-sided and spiteful resolution meant to internationally isolate our country by applying multiple standards,” they added.
The lawmakers called on Iran’s Foreign Ministry to “vociferously and effectively” denounce the resolution and closely monitor the positions and movements of the “recalcitrant and reactionary regimes of the region.”
“We also expect our diplomatic apparatus… to neutralize the anti-Iranian conspiracies of America, the Zionist regime and their allies in the international arena in coordination with friendly countries,” they added.