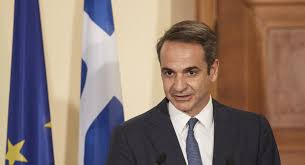 Greece wants to be included in UN-sponsored talks in January on the Libya conflict, Prime Minister Kyriakos Mitsotakis said Sunday, as tensions escalate with neighbor Turkey over the issue.

Libya has become another diplomatic front for Greece and Turkey as the traditional rivals jostle over Mediterranean maritime rights and the competing camps in the North African country’s conflict.

“We do not want a source of instability in our neighborhood. Therefore we want a say in developments in Libya,” Mitsotakis told To Vima weekly in an interview.

“We want to be part of the solution in Libya, as it concerns us too,” he said.

The UN has said an international conference will be held next month in Berlin to pave the way for a political solution to Libya’s ongoing conflict.

Libya has been beset by chaos since a NATO-backed uprising toppled and killed dictator Moamer Kadhafi in 2011, with rival administrations in the east and the west vying for power.

“I have requested, and will do so again with greater insistence, that we participate in the Berlin process,” Mitsotakis said.

In November, Ankara signed a contentious maritime and military deal with the embattled UN-recognized government in Tripoli.

Greece immediately rejected it as baseless, arguing that Turkey and Libya share no maritime border.

“(Libya) is our natural maritime neighbor, not Turkey’s,” Mitsotakis said on Sunday.

The Turkish deal lays claim to much of the Mediterranean for energy exploration, conflicting with rival claims by Greece and Cyprus.

At the same time, Turkey is stepping up military aid to Tripoli, which is battling the forces of military strongman Khalifa Haftar for control of the capital.

A citizen injured by the Saudi army’s fires in Saada