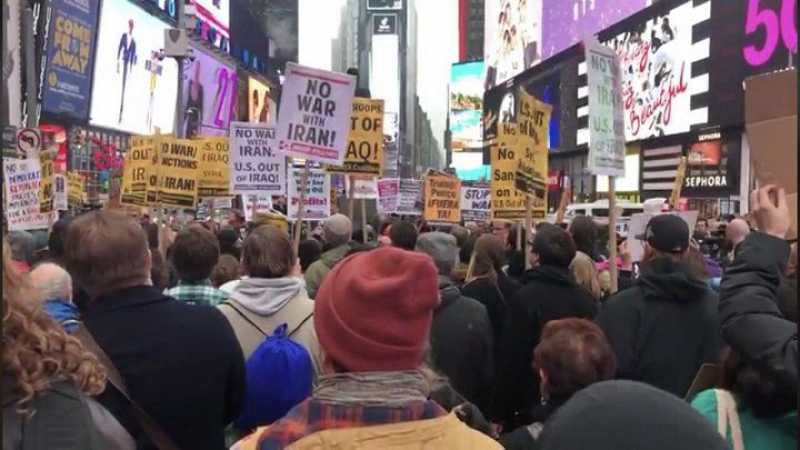 Antiwar Demonstrations across US against Possible War with Iran

Thousands of antiwar protesters gathered in communities across the US on Saturday to condemn the Washington airstrike which killed Iranian General Qasem Soleimani on Friday and caused an escalation of tensions with Iran.

In cities and towns across the United States, more than 80 demonstrations were planned to oppose the killing of the commander, Qassim Suleimani, and the Trump administration’s decision to send thousands more troops to the Middle East.

“No justice, no peace. US out of the Middle East,” hundreds of demonstrators chanted outside the White House before marching to the Trump International Hotel a few blocks away.

Protesters in Washington held signs that read “No war or sanctions on Iran!” and “US troops out of Iraq!”

The protests were spearheaded by Act Now to Stop War and End Racism, an antiwar coalition, and Code Pink, a women-led antiwar organization.

“Unless the people of the United States rise up and stop it, this war will engulf the whole region and could quickly turn into a global conflict of unpredictable scope and potentially the gravest consequences,” the coalition said in a statement.

On Friday, the United States confirmed that its forces had assassinated Major General Qassem Soleimani, the commander of the Quds Force of Iran’s Islamic Revolution Guards Corps (IRGC), Abu Mahdi al-Muhandis in an attack at Baghdad’s international airport, leading to the martyrdom of the two senior leaders and a number of their companions.

Military Sources: US Withdrawing Forces from Region Despite Contrary Claims