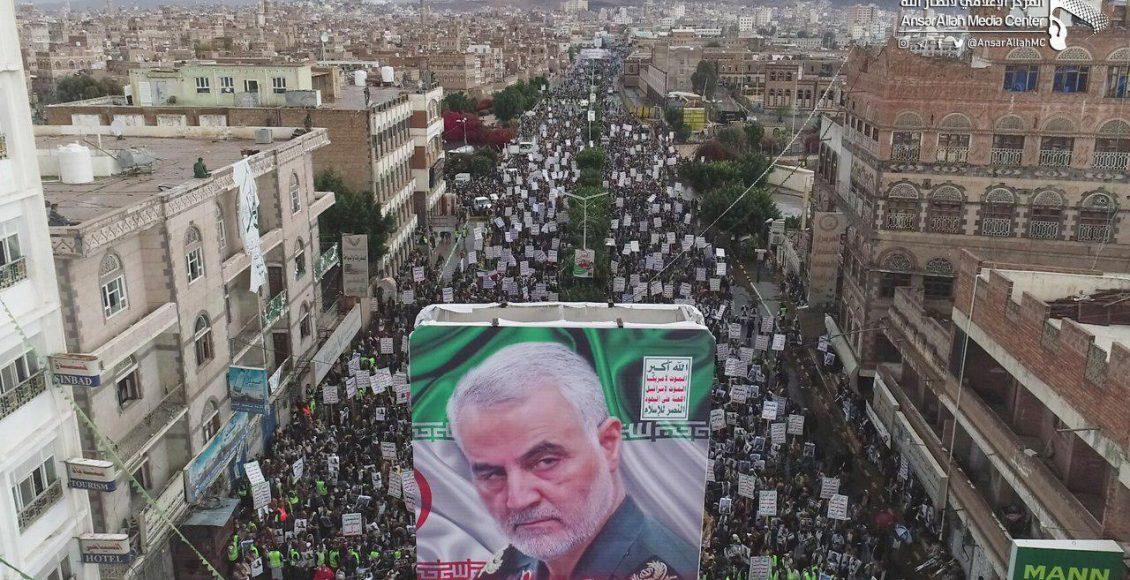 Information Minister Daifallah al-Shami confirmed during the march in Saada that “the blood of Martyr Soleimani and al-Muhandis is the blood of the nation, and they are the martyrs of the whole nation.”

“The rain on Sana’a may be flooded with the blood of the martyrs and it is promises victory. Our Yemeni people affirm their stand with the Islamic nation against American- Zionist arrogance.”

He stressed that “the blood of the martyrs Soleimani and al-Muhandis is not Iranian and Iraqi, but blood belonging to the nations and the free people of the world.”

Al-Shami concluded by saying “the blood of Soleimani, al-Mauhandis and all the martyrs will turn into intercontinental missiles and weapons that destroy American battleships and end their presence in the region.”

Protesters in Sanaa issued a fiery statement, offering their condolences to the Iranian an Iraqi people in the martyrdom of the great mujahideen Qasim Soleimani, Abu Mahdi al-Muhandis and their companions.

” The assassination of two leaders of Muslims is a blatant aggression against the whole nation, which makes it imperative for Muslims to take responsibility and confront the enemy that targets them all without exception,” the statement reads.

“The Yemeni people, as they confront aggression and siege, are present with all their strength to stand by the free nations in the battle for independence and to continue the project of freedom from the forces of domination and arrogance,” the statements confirmed.

It added that” the murder revealed America’s barbarity, being governed by a group of gangs, murderers and criminals.”

” After the crime of January 2, 2020, a new phase begins: either we getting back to human values between nations and peoples, or America continues to rule the world by the law of the jungle.
At this stage, the nation is called upon to mobilize in an Islamic liberation project, in order to get rid of the oppressors and occupiers.”

The statement continued by stating: “It is a fulfilling duty for the martyrs to work by all means available to get the troops out of the area.

The Axis of Resistance represents a shield for the nation, and the enemy’s great frustration is caused by to the power of this axis that has foiled the enemy’s plans and plots . It is time for the Americans and the Zionists to pack their bags and leave. We are a nation that prides itself on its martyrs, we will triumph over their blood, and we will avenge them.”