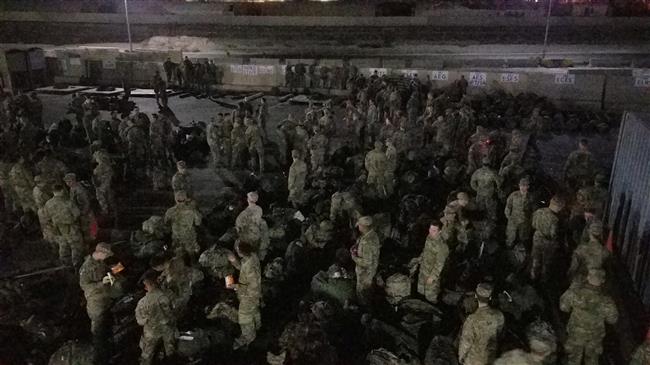 The the US-led military coalition purportedly fighting the Daesh terrorist group has reportedly relocated its headquarters in Iraq to Kuwait in the wake of recent assassination of Lieutenant General Qassem Soleimani, the commander of the Quds Force of Iran’s Islamic Revolution Guards Corps (IRGC), and the second-in-command of Iraqi Popular Mobilization Units (PMU), Abu Mahdi al-Muhandis, and public rage over the targeted killings.

Iraq’s Arabic-language al-Forat news agency reported that the alliance took the decision on Tuesday to move its command center from the Iraqi capital Baghdad to Kuwait City.

The report came only a day after Iraq’s caretaker Prime Minister Adel Abdul-Mahdi said his country and the United States should work together on implementing the withdrawal of all foreign troops from the country.

Abdul-Mahdi made the remarks while talking to US ambassador Matthew Tueller, after Iraqi lawmakers unanimously approved a bill demanding the withdrawal of all foreign military forces led by the United States from the country.

“The prime minister stressed the importance of mutual cooperation on implementing the withdrawal of foreign troops, in line with the Iraqi parliament’s resolution, and to set relations with the United States on a proper foundation,” Abdul-Mahdi’s office said in a statement on Monday.

“He stressed how dangerous the situation is right now and its potential consequences, adding that Iraq is doing everything it can to prevent the descent into open war.”

Also on Monday, the deputy secretary general of Iraq’s al-Nujaba Movement slammed the US assassination of General Soleimani and Muhandis, saying a united front is going to be formed against US’s military presence in the region.

“The leaders of Iraqi resistance groups will convene a meeting either today or tomorrow to declare the formation of a united front against the US [military] presence. It is better for us (resistance factions) to join forces and deal with Washington, which classifies us in the same category,” Nasr al-Shammari said in an exclusive interview with Lebanon-based Arabic-language al-Mayadeen television news network.

“The battle has now moved to the heart of Washington’s allies in the region, which are pushing for attacks targeting us. The term international terrorism applies to the United States once it came to our region and occupied it,” Shammari added.

He noted that the blood of General Soleimani and Muhandis frustrated all US plots against Iraq, emphasizing that his group had always been skeptical about US actions in the Arab country.

“The American presence in Iraq is harmful to military operations against Daesh and the country itself… We will go to war against the American military presence wherever possible in the region,” Shammari said.