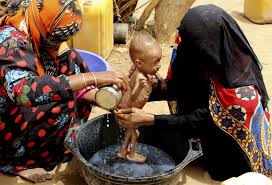 Despite the attempts by the international organization to cover its corruption by pointing the finger of blame at Sana’a, corruption affecting humanitarian and relief work in Yemen continues to unfold.

According to data recently revealed by the Salvation government, and multiple documents obtained by Al-Akhbar news website, the United Nations agents in this poor country do not refrain from wasting aid on fake projects, for personal interests, or even for those who raise their dogs, while 10 million Yemenis suffer from 28 million are extremely hungry, and receive only corrupt aid from the World Food Program.

The deviation of the international aid path to Yemen caused a crisis between the organizations working in the humanitarian field and the government of Sana’a, after the latter’s attempt to control this path, and directing funding towards alleviating the suffering of the Yemeni people due to the aggression and the siege.

In its background, an attempt by the United Nations organizations to dispense financial aid provided by donors in fictitious and unsuccessful projects, and to allocate exorbitant salaries to foreign experts, in addition to its acquisition of more than 80% of the value of these projects as operating expenses.

This crisis, which informed sources in Sana’a reports, is still without solutions in light of the organizations’ continued implementation of very costly projects and following proven mechanisms that have failed to alleviate the suffering of the Yemenis, which prompted the Supreme Council for Coordination of Humanitarian Affairs and International Cooperation in Sanaa to unveil many The facts, revealing the international corruption operations in a country in the worst humanitarian situation in the world.

The council revealed, at a recent press conference, that $ 2.3 billion claimed by international organizations that it spent on humanitarian projects for a number of ministries (such as education, health, water, and agriculture), as well as in helping the displaced, whose fate is unknown.

The Council called on the donors, who had handed over the United Nations 4.2 billion dollars in accordance with the humanitarian response plan since the beginning of this year until October 10 last year, to open the door to investigate this aid, and to ensure the validity of the projects that the organizations claimed to implement.

The Council denied the validity of the figures reported by the United Nations on the amount of spending on humanitarian work in Yemen, accusing it of exploiting the situation in this country in order to practice financial tampering.

The Council also touched on the World Food Program continuing to send corrupt shipments to Yemen, the continuation of other international organizations in exporting expired drugs, accusing the International Organization for Migration of looting the funds allocated to transport refugees to their countries, and its failure to fulfill its commitment in this regard.

The Council also revealed that there is a significant manipulation of the approved fuel in the humanitarian response plan for Yemen; out of 15 million liters of diesel, the organizations only spend 3.4 million liters.

In the Council’s response to the accusations of the Secretary-General of the United Nations, Ursula Muller, in her briefing to the Security Council late last month, the Council affirmed that the United Nations has not committed to any agreement signed with it this year, explaining that the projects that the international organization claims to have been blocked by Sana’a have an 80% share of project financing and so it is useless.

The Council considered that the attack on Sana’a against the Security Council was aimed at covering the extent of corruption practiced by international organizations.

Al-Akhbar obtained documents revealing a number of organizations, such as CARE and OCHA, World Food Program and UNICEF, to the Salvation Government in Sana’a, for the violations committed by them, as well as other shows that some organizations implement projects and purchase Substandard materials.

According to a source from the Salvation Government who spoke to Al-Akhbar, international organizations stand behind vaccinations of millions of goats and sheep during the last period with contaminated vaccines, which led to the abortion of all female goats, and caused a reduction in the production of red meat in Yemen by 50%, which led To the rise in meat prices to more than $ 10 per kilo.

The source pointed out that the relevant authorities set up a specialized committee to monitor the losses and examine the solutions used to vaccinate livestock from smallpox, revealing that the organizations funded livestock vaccination projects with hundreds of millions of dollars, but it was found that the vaccine that was given to about 4.8 million heads of sheep, sheep and cows in various Provincial is a corrupt vaccine.

In addition to the above, the phenomenon of the distribution of corrupt food aid, which reached its climax during the current year, is recognized by a number of international organizations.

According to recent reports to the Humanitarian Coordination Council in Sanaa, It has been proven that the organizations allocate a large part of the aid to their main and regional offices abroad, and spend up to 60% on operating expenses, furniture and support, in addition to allocating huge amounts of relief aid distributions and monitoring the necessary surveys and direct and indirect support to the implementers in vain.

For example, and not limited to, the World Food Program allocated $ 599 million in distribution, supervision and survey costs for 2019, in addition to $ 80 million to transfer aid, but it is strange that the program spent nearly $ 50 million on 8 employees for salaries for only 11 months.

Despite the escalation of the United Nations warnings of the spread of hunger in Yemen, and its confirmation that there are 10 million Yemenis out of about 28 million who suffer from extreme hunger. International organizations are still spending hundreds of thousands of dollars on their dogs’ breeders in Yemen, and more than 129 million dollars on their flight, which has become the only one that flies over Sanaa sky annually, in addition to 150 million dollars worth of buying a vitamin-fortified biscuit distributed in some schools in the country, an amount sufficient to establish three biscuit factories.

According to a source in the Humanitarian Council, the cost of the Internet for the WFP in one year was $ 2.2 million.

According to the documents obtained by Al-Akhbar, international organizations have practiced multiple forms of corruption, and this has led to requests for customs exemptions that have already been granted to them. It became clear later that the exemptions went to the benefit of local merchants, not to serve humanitarian aid, as well as to exaggerate the purchase of fuel, or to make agreements with local organizations to implement projects or buy goods at prices greater than their real value in the market.

In this context, the sources report that the food program planned to purchase diesel from abroad in 2019 at 92 cents per liter, which does not include transportation costs or taxes and customs fees that are exempt from paying them, while the price of a liter of diesel in the Yemeni market for 2019 was about 66 Cents, including tax, customs fees, transportation costs and profits, which means that the “program” will earn from the large financial difference between the two processes.