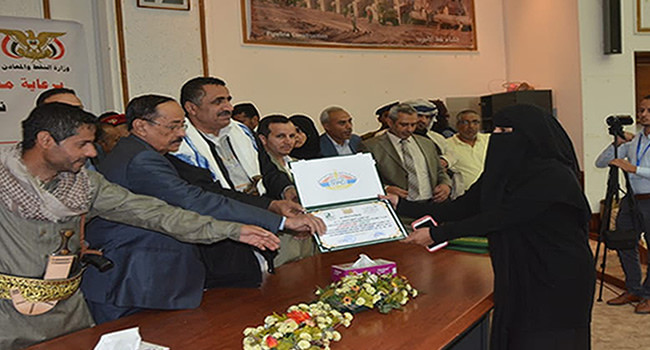 Ministry of Oil and Minerals and its subsidiary units ,Tuesday, held a rhetorical ceremony to mark the martyr’s annual anniversary.

The Deputy Prime Minister for Services and Development Dr. Hussein Maqbouli , during the ceremony, indicated to the great status of the martyrs who gave their lives cheap in defense of the country and its independence.

Dr. Maqbouli said that the sacrifices of martyrs for nearly five years have taught the invaders and aggressors unforgettable lessons, confirming Yemeni people’s rejection of guardianship and domination, regardless of the sacrifices.

He urged paying attention to the families of the martyrs in appreciation of their sacrifices in the fields of honor and heroism.

For his part, Minister of Oil and Minerals Ahmed Daress praised the sacrifices of the martyrs for the sake of defending Yemen, its security and stability, pointing out that honoring the martyrs’ families and caring for them is everyone’s duty.

A rhetorical ,honorable event by the Presidential Office for the martyrs’ families