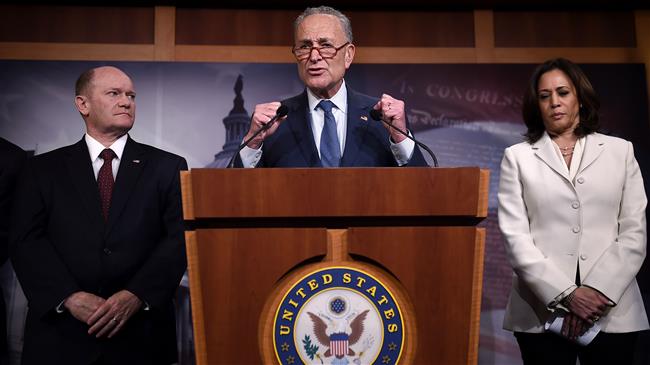 House Democrats on Saturday unveiled an extensive outline of their legal case heading into the Senate impeachment trial of President Trump, lending a preview of the arguments — both substantial and procedural — underlying the central assertion that the president abused his office and should be removed.

In the 111-page brief, Democrats argue that Trump committed high crimes and misdemeanors — charging him with abuse of power and obstruction of Congress — and lay out the evidence and legal analysis they intend to present.

And while they buckle down on their allegations that Trump is guilty of pressuring a foreign power to investigate a 2020 political rival, they say the only lingering question they have is whether the Senate will be a fair arbiter of justice.

“The evidence overwhelmingly establishes that he is guilty of both. The only remaining question is whether the members of the Senate will accept and carry out the responsibility placed on them by the Framers of our Constitution and their constitutional Oaths,” the brief reads. “History will judge each Senator’s willingness to rise above partisan differences, view the facts honestly, and defend the Constitution.”

That statement highlights a central challenge facing the Democrats set to prosecute their impeachment case in the Senate: for all the legal machinations surrounding the debate, the trial is also a battle for public sentiment.

Trump’s Republican allies in the upper chamber are virtually united in opposing his ouster, and the made-for-TV trial is the Democrats’ last best chance to convince voters to join their side and press Senate Republicans to follow suit.

Compiled by the seven Democrats serving as impeachment managers, the brief describes the president’s conduct as “the Framers’ worst nightmare” in arguing that he should be impeached and removed from office.

“President Trump’s ongoing pattern of misconduct demonstrates that he is an immediate threat to the Nation and the rule of law. It is imperative that the Senate convict and remove him from office now, and permanently bar him from holding federal office,” they write.

Launched in September, the Democrats’ impeachment case rests on the allegations that Trump withheld nearly $400 million in military aid and a visit to the White House to pressure Ukraine’s leaders to open a pair of anti-corruption investigations that might have helped him politically.

The first was to target former Vice President Joe Biden, a leading 2020 presidential contender whose son was previously employed by a Ukrainian energy company. The second sought to examine the debunked theory that it was Kyiv, not Moscow, that had interfered in the 2016 election — a notion universally dismissed by the U.S. intelligence community.

“Overwhelming evidence shows that President Trump solicited these two investigations in order to obtain a personal political benefit, not because the investigations served the national interest,” the Democrats’ trial brief states.

The Democrats’ impeachment articles charge Trump with abuse of power in his dealings with Ukraine, and then obstructing Congress as Democrats sought to investigate the episode.

And while their argument is not new, Democrats do pull in new information that has come to light since December, when the House voted largely along party lines to impeach the president.

Democrats folded in the opinion of the Government Accountability Office (GAO), which concluded in a report released Thursday that the Trump administration’s decision to freeze the release of security assistance to Ukraine violated the law known as the Impoundment Control Act (ICA).

They also included a document that Lev Parnas, a longtime associate of Rudy Giuliani, provided to the House Intelligence Committee — specifically a May 2019 letter Giuliani sent to Volodymyr Zelensky, who was then the President-elect of Ukraine.

The Democrats’ brief arrived shortly before Trump’s legal team unveiled its formal response to the impeachment articles, which the Senate delivered to the White House on Thursday.

Previewing that response, sources close to the president’s legal team said Trump’s defense will address both the procedural and substantive aspects of the Democrats’ case.

Legally, the White House maintains, the impeachment articles are “constitutionally invalid” because they “fail to allege any crime or violation of law, whatsoever, let alone high crimes or misdemeanors,” according Trump’s legal team.

The White House also intends to push the argument that the impeachment effort is simply a politically motivated attempt by Democrats to attack a president they couldn’t defeat at the polls.

“The articles of impeachment submitted by House Democrats are a dangerous attack on the right of the American people to freely choose their president,” the lawyers wrote. “This is a brazen and unlawful attempt to overturn the results of the 2016 election, and interfere with the 2020 election.”

A central battle between the two sides hinges on Trump’s efforts to deny impeachment investigators access to information related to the Ukraine affair.

The White House, at the start of the probe, had directed administration officials not to cooperate in the process. And while Democrats were able to secure the testimony of 17 diplomats and national security officials during the course of their examination — many under subpoena — at least twelve others refused to appear.

Additionally, the administration defied all House subpoenas seeking documents related to the episode.

That directive to “categorically stonewall” the investigation — rather than invoke “discrete invocations of privilege or immunity” — led to the obstruction of Congress charge, the trial brief states.

The White House has fiercely contested that charge.

On Saturday, Trump’s legal team cited the president’s power to assert “legitimate executive branch confidential interests, grounded in the separation of powers,” according to a second source familiar with Trump’s defense

“Furthermore, the notion that President Trump obstructed Congress is absurd,” the legal team said. “President Trump acted with extraordinary and unprecedented transparency by declassifying and releasing the transcript of the July 25 call [with Zelensky] that is at the heart of this matter.”

Still, Republicans have also argued that Democrats have leaned too heavily on figures without first-hand accounts of the Ukraine affair — a point they repeatedly made. However, this argument fails to acknowledge that the Trump administration repeatedly sought to block the testimony of first-hand witnesses like former national security adviser John Bolton and acting White House chief of staff Mick Mulvaney.

Democrats, who have pushed Senate Majority Leader Mitch McConnell (R-Ky.) to allow witnesses to be called in the trial, received further reinforcement for their demands when Bolton announced in a public statement that he would be willing to testify if the GOP-controlled Senate subpoenaed him for testimony.

McConnell has been against the idea.

It remains unclear whether the Senate will allow witnesses to be called. The decision will be made later in the trial after both the House and White House present their arguments.

Trump’s legal team is scheduled to release its own trial brief on Monday at noon. By Senate impeachment rules, Democrats will then have exactly 24 hours to formulate their response to that document.

The Senate trial is set to launch on the chamber floor on Tuesday at 1 p.m.

Execution against three people involved in the assassination of al-Mutawakkil ,Abdul Karim al-Khaiwani