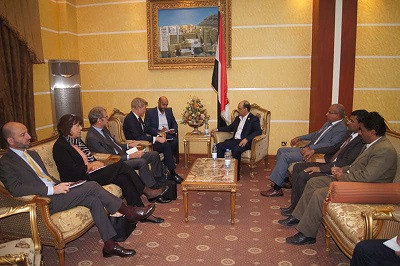 The Minister of Transport meets the Ambassador of the European Union ,the Ambassadors of France ,the Netherlands to Yemen

Minister of Transport Zakaria al-Shami ,Tuesday, met with ambassadors of the European Union (EU), France and Netherlands to Yemen, who are currently visiting Sanaa.

It reviewed issues of a humanitarian nature and what can be presented to the Yemeni people in light of the current conditions the country is going through as a result of the continued aggression and economic siege by the war coalition led by Saudi Arabia and the UAE.

It was focused during the meeting on the Stockholm Agreement and the concessions made by the national authorities in Sanaa as stipulated in the agreement, with the testimony of the United Nations mission in support of Hodeidah agreement and the international inspectors, in an initiative to demonstrate goodwill towards peace in Yemen.

The meeting touched on the continued closure of Sanaa International Airport by the aggression coalition, which has caused the death of thousands of patients, while 40 thousand patients await unknown fate, and the systematic destruction of the port of Hodeidah and its equipment, as well as the continued detention of food, medicine and fuel vessels.

The Transport Minster praised the role and efforts made by the European Union and France for peace in Yemen, as well as the great role of the Kingdom of the Netherlands in providing assistance to Yemeni people.

The ambassadors confirmed that they seek to achieve peace in Yemen, as the only option to end the humanitarian suffering of the Yemeni people.

Two children injured as a bomb from the remnants of aggression explodes in Durayhmi district, Hodeidah