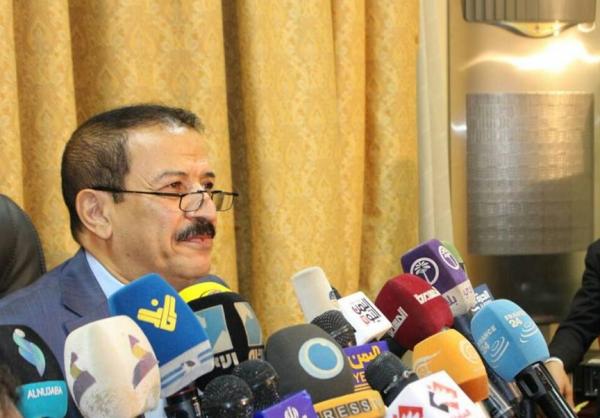 Minister of Foreign Affairs Hisham Sharaf on Tuesday refuted the claims of Hadi’s government on the feasibility of its resolution No. 49 of 2019 regarding the payment of customs duties and taxes for the shipments of oil derivatives.

In letters he sent to Secretary-General of the United Nations, President and members of the Security Council, Director of the World Bank, Director of the International Monetary Fund and the UN envoy, the foreign minister considered this decision an extension of the resolution No. 75 of 2018, which imposed further complications and arbitrary measures on oil derivatives merchants and importers, with the aim of discouraging them from importing those materials through the port of Hodeidah.

He explained that these decisions contributed to the acceleration of the economic deterioration and the growing corruption of the mercenary government, according to economic reports and international analysts, in addition to the inability to stop the rise in the exchange rate and food prices and the failure to pay the salaries of employees in all the provinces of the country, despite they collect crude oil revenues and other income in the occupied areas.

In his letters, the Foreign Minister called on the international community to pressure for the neutralization of the national economy as one of the most important confidence-building steps in preparation for the resumption of the political process and ending the aggression and the blockade imposed on Yemen.

The letters also affirmed that these measures practiced by the mercenary government violate all international norms and agreements relating to wages and salaries, including those stipulated in the International Covenant on Economic, Social and Cultural Rights of 1966, and the International Labor Organization convention on the protection of wages in 1949.

The Minister of Transport meets the Ambassador of the European Union ,the Ambassadors of France ,the Netherlands to Yemen