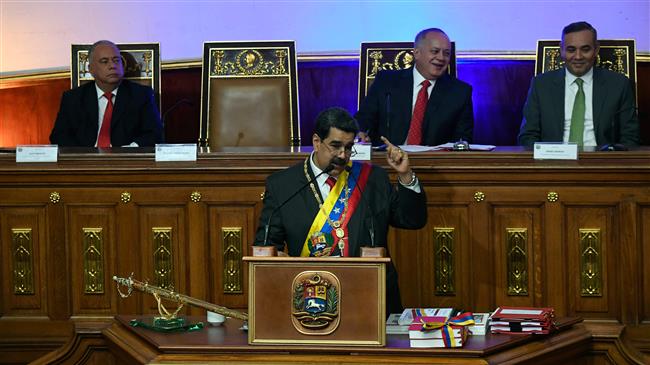 The administration of US President Donald Trump has imposed sanctions on Venezuela as part of attempts to pressure the country’s legitimately-elected President Nicolas Maduro to resign.

US Secretary of State Mike Pompeo said Monday that the move was meant to support Juan Guaido, the US-backed opposition figure who claims to be the president.

“We don’t talk about particular sanctions but everyone can fully expect that the United States is not done. The work that we’ve done over these past months has been building to the place that we find ourselves today and I, I would fully expect there will be further action that the United States would take to continue to support President Guaido and the Venezuelan people,” claimed Pompeo as world leaders were preparing to meet at the World Economic Forum in Davos, Switzerland.

Guaido also claimed that “on this tour we will be on over the next few days– I’ll reveal details as we go along — we will have important meetings in Europe, in the European Union and specifically in Davos.”

The US top diplomat further repeated his claims against the government in Caracas, offering a grim picture of the situation in the region.

“He’s now added to his terror regime, working alongside terror organizations inside of his own country. He is now running an operation that looks more like a cartel than anything else that one could describe. This isn’t good for Venezuela, it’s not good for the countries that are around Venezuela,” said the former CIA chief.

Washington has already imposed rounds of sanctions against the oil-rich country to oust Maduro and recognized Guaido, who has declared himself “interim president.”