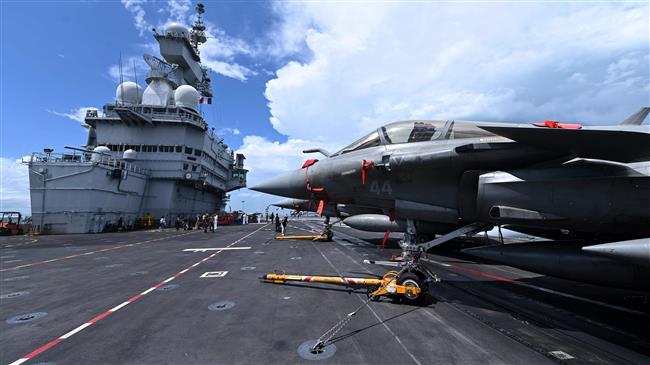 France is beefing up its military presence in the Middle East, sending a radar system and an aircraft carrier to the region gripped by heightened tensions. French officials told Reuters Friday that the country had deployed a radar system as part of the Jaguar Task Force mission on the eastern coast of Saudi Arabia, but declined to provide further details.
Speaking to the French military late Thursday, French President Emmanuel Macron said in the Arabian Peninsula and the Persian Gulf, “where tensions are mounting, we have deployed in record time the Jaguar Task Force, which contributes to reassuring the Saudi kingdom.”
Macron also announced that France would deploy the Charles de Gaulle aircraft carrier to join the US-led coalition purportedly fighting the Daesh Takfiri terrorist group.
“The aircraft carrier will support Chammal operations (in the Middle East) from January to April 2020 before deploying to the Atlantic Ocean and the North Sea,” he said, referring to the French component of the US-led mission in the Middle East. “Once more our plane carrier will be the center for combined operations amongst several European countries,” he added.
Macron further noted that the nuclear-powered carrier would be escorted by a European squadron, including vessels from Germany, Belgium, the Netherlands, Spain, Portugal and Greece.
French forces would remain in the alleged fight against Daesh, he said, warning that while the terror outfit no longer holds territory, “its menace remains, in another lurking, more insidious form.”
There are some 1,000 French troops in the region, with French warplanes operating as part of the US-led coalition.
Saudi Arabia is one of the major clients of France, which is the world’s third-biggest arms exporter. The kingdom is using French tanks, artillery and Caesar howitzers in its bloody war on Yemen.
In September 2019, the UN said in a report that the US, Britain and France may be complicit in war crimes in Yemen by arming and providing intelligence and logistics support to the Saudi-led coalition that starves Yemenis as a war tactic.