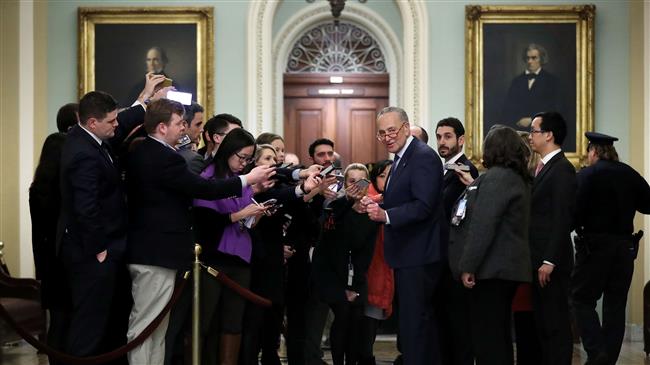 The Republican-majority US Senate has blocked attempts by Democrats to obtain evidence and call witnesses in President Donald Trump’s impeachment trial, a sign that the process could advance on lines favorable to Trump.

The “organizing resolution” proposed by Senate Republican Leader Mitch McConnell was passed along party lines by a vote of 53-47 on Wednesday.

After more than 12 hours of debate, the US Senate voted to approve the Republican plan for the rules governing the impeachment trial.

The Senate also rejected 11 amendments presented by the Democrats.

Trump was impeached last month by the Democratic-led House of Representatives on charges of abuse of power and obstruction of Congress.

The Republican president is accused of pressuring Ukraine to investigate former Democratic Vice President Joe Biden, a political rival, and then impeding the inquiry into the matter.

Trump denies any wrongdoing and describes his impeachment as a Democratic hoax that aims to upset his 2020 re-election effort.

Democratic lawmakers have slammed the rules of impeachment announced by Senate Republicans, saying the process is “rigged” and different from the impeachment of former Democratic President Bill Clinton.

These are the next phases in Trump’s impeachment trial, just the third of a president in US history:

The Democratic members of the House of Representatives chosen to present the impeachment case against Trump will deliver opening arguments to the Senate beginning on Wednesday.

They will have a total of 24 hours over three days to present their case that Trump should be impeached for abuse of power and obstruction of Congress over his attempt to pressure Ukraine to investigate Joe Biden, one of his main political rivals.

Senators will have a total of 16 hours to ask questions in writing to House prosecutors or the White House defense team. The written questions from the senators will be read out loud in the chamber by US Supreme Court Chief Justice John Roberts, who is presiding over the trial.

Following the conclusion of deliberations, the Senate will vote on each of the two articles of impeachment. A two-thirds majority of the senators present is required for conviction. Conviction on just a single article is enough to remove Trump from office.

The Senate vote could possibly be held late next week – head of Trump’s planned February 4 appearance before a joint session of Congress for the annual State of the Union speech.

A public reconciliation between the sons of the two districts of Qaflah Alathar ,Habour Zalima signed in Amran province