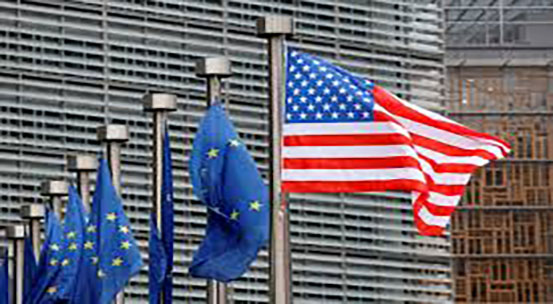 France, Germany say EU Will Respond in Kind to New US Tariffs

The European Union will respond reciprocally to any further tariffs imposed by the US on the bloc’s products, French and German officials have warned in separate comments.

Germany’s ambassador to the United States, Emily Haber, said on Wednesday the EU is as strong economically as the US, and will respond to any additional US tariffs with duties of its own on US products.

Addressing an event hosted by the Center for Strategic and International Studies, Haber said the EU’s response will be “in the same dimension and the same vein.”

In the same meeting, French Ambassador Philippe Etienne to the US also warned that escalating tit-for-tat tariffs would hurt both economies.

“It is not in our interest to have an escalation of tariffs,” he said.

In Davos, Switzerland, US President Donald Trump on Wednesday renewed his threat to impose tariffs of up to 25% on imports of cars from the EU if the bloc does not agree to a trade deal.

Washington has already imposed a 25% tariff on a raft of European goods, and a 10% tariff on aircraft, in a long-running pair of cases before the World Trade Organization over aircraft subsidies. It warned in December that it would raise those tariffs and expand the list of affected products.

Last Wednesday, The Washington Post revealed that the Trump administration had issued a shocking private threat against the E3 states (France, Germany and the UK), just a week before the trio jointly triggered the dispute mechanism of the 2015 Iran nuclear deal, which amounts to a formal accusation that Tehran had breached the agreement.

Regarding the US threat reported by the Washington Post daily, German Defense Minister Annegret Kramp-Karrenbauer confirmed at a press conference on Thursday that “this expression or threat, as you will, does exist.”

For an entire year since Washington’s withdrawal, Tehran remained fully compliant with the JCPOA, waiting for the co-signatories to fulfill their end of the bargain by offsetting the impacts of Washington’s bans on the Iranian economy.

A day after the Washington Post’s report, Iran’s Foreign Minister Mohammad Javad Zarif blasted the E3 states for bowing to American bullying and selling out the “remnants” of the JCPOA, which has been endorsed by the UN Security Council as a resolution.

“E3 sold out remnants of #JCPOA to avoid new Trump tariffs. It won’t work my friends. You only whet his appetite. Remember your high school bully?” Zarif said. “If you want to sell your integrity, go ahead. But DO NOT assume high moral/legal ground. YOU DON’T HAVE IT,” Iran’s top diplomat tweeted.

The President to Griffiths: The escalation in Mareb ,Nehm will end our initiative and lead to dangerous results

The aggression forces intensify their violations of the Hodeidah agreement ,air strikes on Sana’a, Saada, and Amran