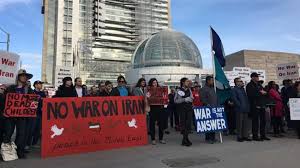 Protesters Warn against War with Iran in San Francisco

Hundreds of people have taken to the streets in San Francisco, California, to protest Washington’s aggression against Iran, slamming President Donald Trump for his January 3 order to assassinate senior Iranian commander Lieutenant General Qassem Soleimani by a drone strike in Baghdad.

“We are here to show that the people of Bay Area oppose further war in the Middle East,” Wassem Hage, an anti-war activist. “We oppose the recent military aggression the Trump administration has chosen to take against Iran. We opposed troops involved in Iraq. We want all troops out of Iraq.”

The protest on Saturday afternoon was organized by local activist groups including Arab Resource and Organization Center (AROC) and Bay Resistance.

It followed heightened tensions with Iran after the assassination of General Soleimani, the commander of the IRGC’s Quds Force.

The protesters, a mix of college students and activists, held up anti-war signs and chanted slogans against the Trump administration.

“We want the repeal the AUMF which allows president of the United States to act in the Middle East with impunity, to commit acts of violence and war without any accountability to the people,” Hage said, referring to the authorization for use of military force which paved the way for the invasion of Iraq in 2003.

The Trump administration has argued that the Iraq AUMF empowered President Trump to order the drone strike against Gen. Soleimani.

Similar protest rallies were held in Washington DC and Wisconsin.

Speakers at the event said, while tensions between Iran and the US have somewhat settled, the US is still engaging in economic warfare with Iran.

“It’s easy to see violence as being bombs and bullets but it’s harder to see it as people being unable to get certain kinds of food or medicine they need and that’s what the US sanctions do,” said PSL representative Sawyer Johnson.

Meanwhile, the peace advocacy group CODEPINK is collecting American signatures for an open letter apologizing to the Iranian nation of the US aggression, especially Trump’s “reckless” order to assassinate General Soleimani.

“As Americans committed to peace and the safety of all people, we, the undersigned, apologize for the actions of our reckless, hate-filled president,” the letter reads, “and pledge to do everything we can to stop Trump’s aggression, remove the crippling sanctions you are suffering under, and resume a process of diplomacy with your country.”

In a tweet about Saturday’s demonstrations, CODEPINK co-founder Medea Benjamin warned that war was still a very real possibility.

“Think we avoided war with Iran a few weeks ago?” said Benjamin. “Think again. We are still on the brink.”

Human Rights Minister: We will prepare legal files for crimes committed against childhood