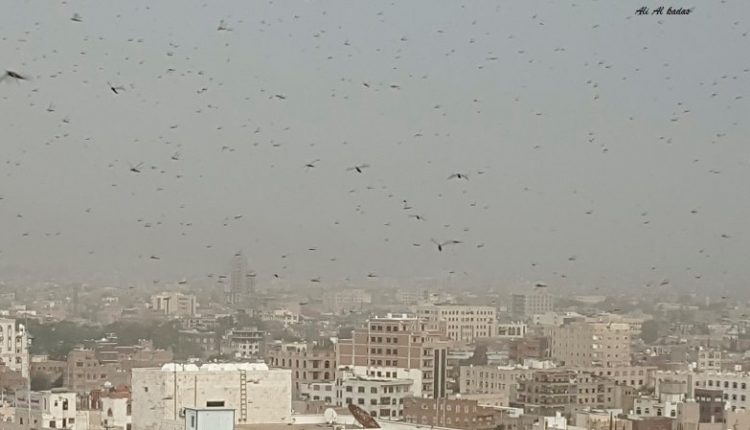 The American Newsweek magazine said today, Monday, in a report on locust outbreaks and their growing numbers more than in previous years, that the 10 hurricanes that witnessed the Middle East and East Asia region. The reason is that it disrupted due to the war on Yemen by the US-Saudi coalition countries, allowing the swarms to grow wildly out of control and expand to other regions.

Newsweek reported experts in this regard as saying that the Saudi-led war on Yemen played a role in locust activity. “The reason for this is that the war disrupted the locust response system in the country, which allowed the swarms to grow significantly, out of control and expand to other regions,” it explained. The report added that locusts invaded whole cities including Kenya, Ethiopia and Somalia, and the largest recorded swarms to date have reached 59.5 km and a width of approximately 40 km.

Earlier this week, the United Nations issued a statement saying it is the most severe infestation Kenya has seen in 70 years.

Desert locusts are one of the oldest and most destructive pests on the planet, traveling up to 93 miles and eating the equivalent of their own weight in fresh food every day.

The report pointed out that These insects can form incredibly dense swarms, each containing between 40 to 80 million individual locusts per square kilometer, or 0.4 square miles. A 40 million insect swarm can consume the same amount as 35,000 people, consuming almost all the green vegetation they pass.

According to News Week, Experts predict the swarms will get worse in upcoming months and could reach sizes 400 times as large as they are right now. They are also anticipating severe food shortages and dramatic impacts related to food security, with new generations of swarms set to coincide with planting season in March and the harvesting season in summer.

The aggression jets launch an airstrike on Mareb, bomb citizens’ homes in Hodeidah