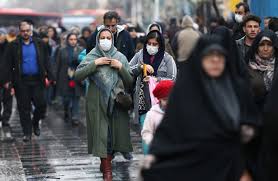 Iran’s Health Ministry says the death toll from the coronavirus outbreak in the country has reached 12, while the number of confirmed infections stands at 64.

The ministry’s spokesman Iraj Harirchi was speaking at a press conference in Tehran on Monday alongside Ali Rabiei, spokesman for the Iranian administration.

Harirchi refuted a fatality figure of 50, claimed by a lawmaker representing Qom in the parliament. The city reported the first case of the virus and has witnessed most of the deaths from the virus.

“If it is confirmed that even half of this number is true, I will resign,” he said.

The official urged against hyping up the problem. The Islamic Republic, he said, began taking necessary precautions after the epidemic broke out in China.

“Currently, the situation has almost stabilized in the country, and we have managed to reduce the problem to the minimum,” Harirchi said.

The outbreak began in the central Chinese city of Wuhan in December. Latest figures by the World Health Organization shows that it has killed more than 2,500 in China, where more than 77,000 have been infected.

The death toll announced by Iran’s Health Ministry reflected an increase from a fatality figure of eight that had been reported on Sunday.

The ministry spokesman said Gilan province in northern Iran had the highest number of infections after Qom.

The official, however, categorically ruled out the likelihood of a “lockdown” as a preventative measure in the face of the outbreak, saying the measure suited post-World War II circumstances, when it would be used to contain plague and cholera.

“Lockdown bears consequences. And we are opposed to it,” he said.

Harirchi also rebuked certain countries for refusing to be transparent on the death toll from the virus. These include one of Iran’s southern neighbors, where unofficial reports point to 18 deaths, but no official confirmation has been offered, he said, without specifying.

Rabiei, for his part, urged against the “politicization” of the issue by various parties, groups, and media outlets. He cited one report about the pending shutdown of public offices and institutions across the country, rejecting it an instance of misinformation.

The official said the country faced no shortage of face masks, which were being distributed by health centers. Harirchi also said people who are not sick do not have to wear masks.

Rabiei also announced that a task force, created on President Hassan Rouhani’s orders to confront the outbreak, would hold its first session with the president as its chairman on Tuesday.