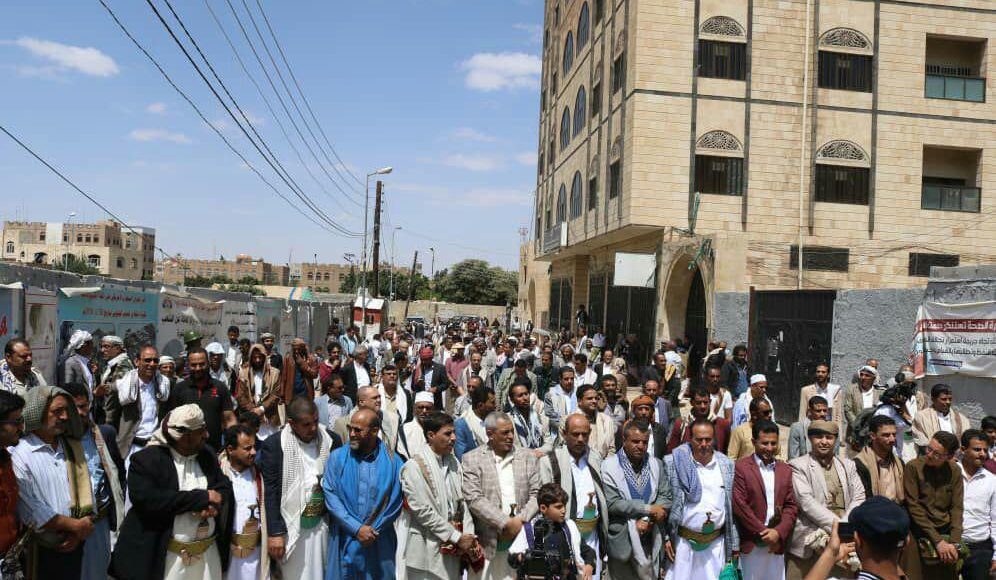 The employees of the Yemeni Oil Company, its unions and its bodies, on Friday, protested in front of the United Nations office in Sana’a. During the vigil, the spokesperson for the oil company, Amin Al-Shabati, said that “the aggressive alliance added five oil ships to the detention list, bringing the total of the detained ships to 11 oil ships carrying more than 300,000 tons of oil derivatives.”

Al-Shabati indicated that the detention of oil ships comes in the delusional presence of the UN, its compliance with the wishes and goals of the aggression coalition, and its failure to defend its permits granted to these ships, which makes it a sponsor of the attack on human rights in Yemen.

The statement issued by the endowment confirmed the continuation of the open sit-ins carried out by the employees of the Yemeni Oil Company in front of the UN’s Office in Sana’a “336 days” until their demands are met, releasing of all the detained oil ships and ensuring that they are not detained in the future.

The statement pointed out that the United Nations is a major reason for the suffering of the Yemeni people and the destroying of the economy because of its support for the aggression alliance that continues to piracy on oil and medicine ships, and prevents their entry into the port of Hodeidah despite the United Nations granting entry permits to these ships.

The statement renewed the demand of the United Nations to lift the embargo on Sanaa International Airport and Ras Issa port and neutralize the economy, and the Yemeni Oil Company, its facilities and the stations of its agents from targeting.

A series of air raids by the aggression on al-Jawf, Jizan