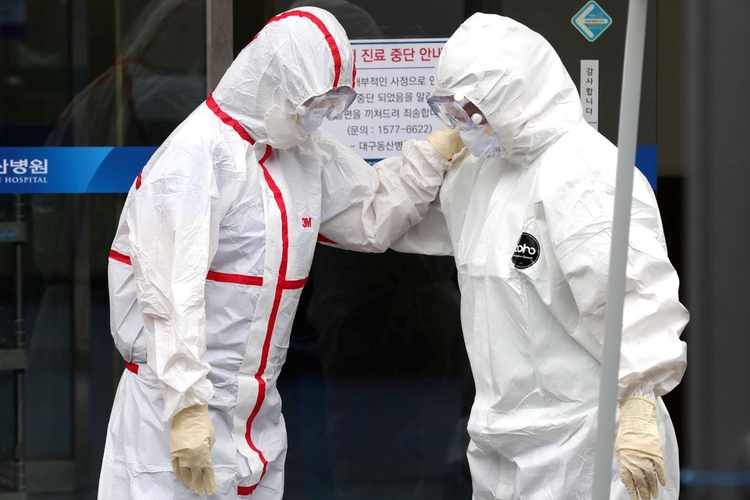 The novel coronavirus has spread rapidly outside of China since its first known case in December 2019, ravaging markets and establishing itself as a global threat.

Various companies, governments, and health authorities have put into place sweeping measures to stop the virus spreading, like bans on travel, quarantines, or canceling events.

But such measures rely on strictly following protocols. Whether through complacency, miscommunication, or incompetence, that has not always happened.

Here is a list of all the times something slipped through the net.

People in France ignored the government’s advice to practice social distancing, and were photographed socializing outside cafes and enjoying the outdoor weather in large groups over the weekend.

Shortly afterward, the French government required people to produce a form justifying why they needed to be outside, and imposed a fine of up to 135 euros ($150) for anyone who goes out without their permission document.

“What happened with the news leak has caused many people to try to escape, causing the opposite effect of what the decree is trying to achieve,” Roberto Burioni, a professor of microbiology and virology at Milan’s Vita-Salute San Raffaele University, told The Guardian.

“Unfortunately, some of those who fled will be infected with the disease.”

A total of nine coronavirus cases have been linked since February 24 to US Forces in Korea, according to Business Insider.

A commander at US Army Garrison Daegu, Edward Ballanco, said the contractor was “sick one week ago and kept coming on post” and that he did not answer any of the health questions “truthfully.”

Calling the man’s actions “reprehensible,” the commander said, “he will never be coming on post again.”

The family had been told repeatedly to self-quarantine.

“We relied on common sense and goodwill toward the community to self-quarantine,” the St. Louis County Executive, Sam Page, said in a March 8 press conference.

“The way the family has reacted to this situation is really a tale of two reactions … A study of how people should and should not react to the coronavirus.”

The patient is an employee at Dartmouth-Hitchcock Medical Center, according to NBC Boston.

On March 3, health officials announced that there was a second recorded coronavirus case in the state.

All others who attended the event are now being told to stay isolated, NBC Boston reported.

The Centers for Disease Control and Prevention (CDC) admitted their mistake, which happened several days earlier, in a March 1 statement.

They said: “The discharged patient had some contact with others while out of isolation, and CDC and local public health partners are following up to trace possible exposures and notify them of their potential risk.”

The CDC also said it was looking into recent similar incidents where test results have alternated back forth.

According to a report by Italian newspaper Corriere della Sera, the 38-year-old man was admitted to the emergency room in Codogno on February 19 with respiratory problems.

During the 36-hour period in which he was waiting to be seen, the patient made contact with hospital staff and visiting friends and family.

He told reporters: “There has been a management of the hospital not entirely proper according to prudent protocols, which are recommended in these cases, and this has certainly contributed to the spread.”

Italy is now the epicenter of the outbreak, and is in complete lockdown.

At the event, 6,000 members of the doomsday Shincheonji Church of Jesus were asked to “remove face masks while attending prayer sessions.”

South Korea experienced a massive boom in cases in February, with many cases linked to the church.

Health officials on the day of the mass wedding announced that the number of cases in the country had risen to 104.

Church leaders went ahead, despite the cancellation of other festivals, concerts, and graduation ceremonies in South Korea.

Staff members at NorthBay VacaValley Hospital in northern California didn’t test the woman because she had not recently traveled to or from China, or had contact with any other confirmed cases, according to The Washington Post.

Four days later, after her symptoms got worse, they admitted her on February 15.

The hospital since said it was “meticulously tracing” anyone who came into contact with the woman in case they got sick too.

Outside of Hawaii, the CDC admitted on February 12 that some coronavirus test kits sent to laboratories around the country did not work properly, according to the New York Times.

It is unclear how many of these tests were faulty, leading to heightened concerns about the effectiveness of using the tests to track the spread of disease, Business Insider’s Rosie Perper reported.

The patient was released from the UC San Diego Health center after initial test results found they had not been infected, Business Insider reported on February 11.

But when the patient started showing symptoms and tested positive, they were sent back for observation and isolation.

In an email statement, published by the San Diego Union-Tribune, the university said that even though the infected evacuee was accidentally released, all proper protocols were followed.

“The patient left UC San Diego Health the same way they arrived, with all precautions taken,” it said.

A ProPublica investigation found that the CDC shunned official World Health Organization test guidelines by trying to create a more complicated test of its own which could also identify similar viruses.

It didn’t work as expected.

While it is unlikely that the Uber driver caught the virus, the woman went against official advice by not calling an ambulance or using a private vehicle to get to the hospital.

The other British evacuees who arrived with the infected passengers expressed their anger that those who tested positive were allowed to fly.

In a WhatsApp message seen by Sky News, one wrote: “They let them fly without the results, so they have put us in a position where we now could have it too.”

From the beginning of the quarantine, passengers reported a lack of information on the ship as well as concerns that their temperature screenings were not done properly, Business Insider’s Morgan McFall-Johnsen reported.

Crew members were finally allowed to leave the coronavirus-stricken ship on February 27 after weeks onboard.

The ship ended up recording close to 700 infections and seven deaths from the coronavirus.

Japanese health minister Katsunobu Kato apologized after a woman in her 60s tested negative, was allowed to leave, and later turned out to have had the virus.

She had already returned to her home in a suburb outside Tokyo, Japan, according to The Guardian.

The newspaper reported that Kato said that the ministry was trying to reach other passengers for retesting.

“We deeply apologize for the situation caused by our oversight. We will take all necessary measures, like double checks, to prevent a recurrence,” he said.

At a press conference on February 24, Yosuke Kita, a senior coordinator at Japan’s Ministry of Health, said: “I admit, our isolation policy was not perfect. No place is perfect except in a hospital.”

“The whole idea of the cruise ship quarantine was ill-conceived, and the resultant slew of infections it spawned was completely predictable,” Dr. Amesh Adalja with the Johns Hopkins Center for Health Security previously told Business Insider.

The claim came from a whistleblower at the Department of Health and Human Services and was not made public until almost a month later, in an article by The Washington Post.

David Marland lived just five minutes from a live animal and seafood market in Wuhan which was ground zero for transmission of the virus.

He told Britain’s Daily Telegraph newspaper that he was concerned about the official advice he was given.

It was by then clear that an outbreak was underway: three days later the entire city would be quarantined.

“Having a big event like this at a time of an epidemic amounts to a lack of basic common sense,” said Li Xinzhou, a respiratory specialist in Shanghai, told The Wall Street Journal.

As it became clear how serious the outbreak was, China’s central government fired officials in Wuhan and took the unusual step of publicly admitting its mistake.

The admission came from the Politburo Standing Committee, the most powerful body of the Chinese Communist Party.

In an official record of the meeting, published by the state-run Xinhua news agency, the committee said that the epidemic had exposed problems in its emergency management, which it promised to improve.

The outbreak began in December 2019, and at first, scientists did not realize what a disaster the new disease would be.

Chinese social media was filled with outpourings of grief and anger after Li’s death, with many posts featuring the hashtag “We want freedom of speech.”