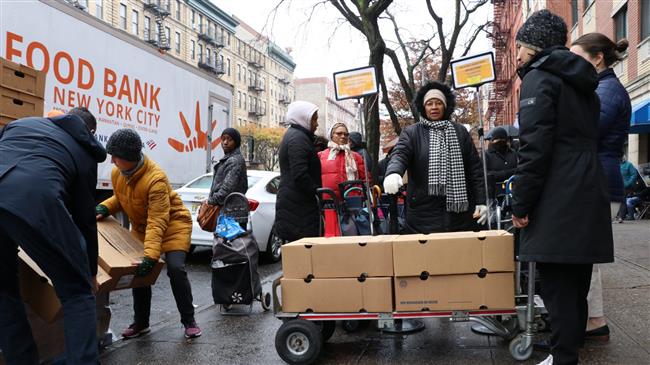 The US is facing a hunger crisis as the worsening coronavirus pandemic cripples the economy and triggers the highest unemployment on record, forcing an unprecedented number of Americans to resort to food banks for emergency supplies, according to a report.

The demand for food aid has increased as much as eightfold in some US cities as millions become unemployed, according to an investigation by the Guardian newspaper, citing interviews with a dozen providers across the country.

About one in three people in the US currently seeking food at charitable organizations have never previously needed emergency food aid, according to the report.

The Guardian said it contacted food banks and pantries in nine states, which all reported unprecedented demand, tumbling donations and a drop in volunteers due to the coronavirus crisis.

The National Guard, America’s reserve military force, has been deployed to help food banks cope with growing demand in cities including Phoenix, St Louis and Cleveland, amid growing concerns that supplies may run low as the crisis worsens.

Overwhelmed food pantries are switching to home deliveries and drive-thrus to minimize the spread of the coronavirus as nearly 300 million Americans are under lockdown, the report said.

“I’ve been in this business over 30 years, and nothing compares to what we’re seeing now. Not even when the steel mills closed down did we see increased demand like this,” Sheila Christopher, director of Hunger-Free Pennsylvania, which represents 18 food banks across the state of Pennsylvania, told the Guardian.

“This is a perfect storm impacting food banking as we know it,” said Zuani Villarreal, a spokeswoman for Feeding America, a Chicago-based network of more than 200 food banks that feed 46 million people.

Another 6.65 million US workers filed for unemployment benefits last week, the most ever recorded, as the coronavirus forces businesses to shut down nationwide, the US Labor Department reported Thursday.

The government’s weekly jobless report, the most timely data on the economy’s health, offered the clearest evidence yet that the longest employment boom in US history probably ended in March.

Employers are slashing their payrolls to try to stay afloat because their revenue has collapsed, especially at restaurants, hotels, gyms, movie theaters and other venues that depend on face-to-face interaction. Auto sales have sunk, and factories have closed.

The rust belt states, a region of the United States that experienced industrial and economic decline starting in the late 1970s and early 1980s, are among the hardest hit by the coronavirus economic crisis.

Half of American adults have either no emergency savings or not enough to cover three months of living expenses, according to Bankrate’s 2019 Financial Security Index.

90 violations of the aggression forces on Hodeidah fronts

US to Venezuela: ’We’ll Stop Killing You If You Do What We Tell You to Do’