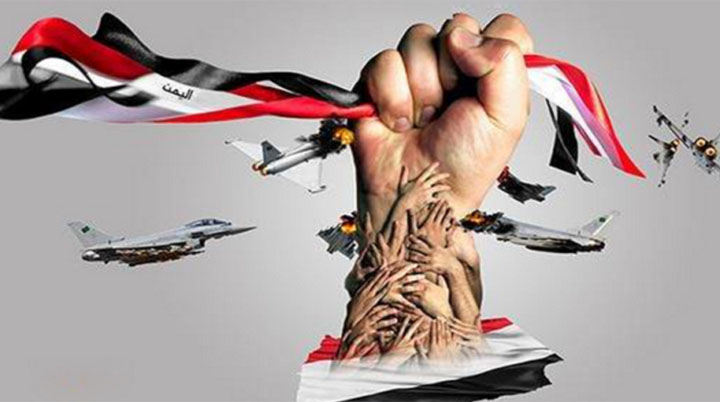 After five years of war and siege, the Yemeni economy remains resilient in the face of crises imposed by the Saudi-led coalition, some of which were implemented by its domestic allies.

In terms of numbers, the sixth year of war reveals the depth of the economic aspect of the Yemeni tragedy

As in the humanitarian file, the consequences of the Saudi war on Yemen were significant on the economic file for this country.

The numbers speak for more than 28 million people who need the basic necessities of survival, including food, medicine, water, electricity, health and education, out of 29.7 million Yemenis. Moreover, there are 24 million in need of humanitarian aid, 12 million of them are in dire need of that aid.

Poverty rates rose to more than 85%, unemployment exceeded 67%, after millions lost their businesses, the economy contracted more than 50%, the business environment deteriorated and domestic and foreign investments fell to the lowest levels, factories stopped and public markets were targeted, and sources of income from foreign currency stopped due to the financial restrictions imposed by the coalition of aggression, leading to a sharp decline in foreign exchange reserves at the Central Bank, before and after transferring it from Sana’a to Aden, and the deterioration of the national currency exchange rate by 186% in five years.

As a result, the inflation rate rose to more than 45%, the family income rate decreased by 55% and 1.2 million employees, representing 22% of the workforce, were deprived of their salaries, by a decision of the government of the outgoing President, Abd Rabbuh Mansour Hadi, imposing the starvation policy on 4.7 million people represents the families of state employees.

Official and civil organizations reports state the gravity of the situation. The planning ministries in Sana’a and Aden agreed that the economic losses rose to $ 99.5 billion over the past five years.

According to the same study, the decline in the total actual public revenues of the state amounted to 71%, to exceed the losses of the state budget in the four years of $ 40 billion, bearing in mind that the outcomes of the national economy from foreign exchange, during the same period, decreased from about $ 18.6 billion to $ 8 Billions in 2019, at 57%. Hajar points out that the national economy needs more than ten years to rehabilitate it to what it was before 2010.

While the Ministry of Planning and International Cooperation estimated GDP losses at $ 71 billion during the past four years, observers expect high rates of losses in light of the ongoing war and blockade.

The Ministry of Planning in Sana’a had estimated the opportunity cost in gross domestic product at constant prices for 2010 at 49.8 billion between 2015 and 2019. The economy needs more than ten years to qualify as it was before 2010.

In parallel, the Saudi-Emirati aggression and the pro-aggression government tended to dry up the sources of national income from all revenues, and to close various financial channels flowing to the Central Bank, which feeds public spending.

The coalition enabled the pro-aggression government to rob public revenues in the southern and eastern governorates that represented 75% of the country’s revenues, and to tamper with the functions of the Central Bank after transferring it from Sana’a to Aden, starting by printing 1.7 trillion riyals without cash cover, as well as floating the riyal in front of foreign currencies with the intention of speculating and manipulating the currency in the market.

The damage also affected the oil sector, which is the main driver of the country’s economy, its revenues represented 70% of the public budget resources before the war, 63% of Yemeni exports to international markets and 30% of GDP.

According to the latest estimates of the Ministry of Oil in Sana’a, the losses amounted to $26 billion and 56 billion Yemeni riyals, representing the losses of the oil sectors of the ministry and its subsidiaries and minerals.

As for the statistics of the Fisheries Commission in Hodeidah, the fishing sector incurred more than $ 5.6 billion in losses to the infrastructure of this sector.

The study of the overall economic developments funded by UNICEF, late 2019, confirms that the construction sector, the fourth largest sector in the country and contributed 6% of the real GDP from 2011 to 2014, contracted due to the war by 59.2% and its losses was estimated at $ 2.5 million.

Likewise, the movement of the wholesale and retail sector, which represents 17% of the output, decreased by 47% and its direct losses were estimated at 6.9 billion.

According to statistics of the Ministry of Agriculture, the direct and indirect damages incurred in the sector in five years amounted to 16 billion, while preliminary estimates indicate a 40% decline in agricultural production in the country.

Despite the above direct and indirect damages, the Yemeni economy did not collapse, although its growth indicators retreated to the lowest. It remained steadfast and coherent, unlike the calculations of the coalition that took from striking the economy as a way to kneel Sana’a and force it to surrender, with a fate similar to the fate of the military bet.