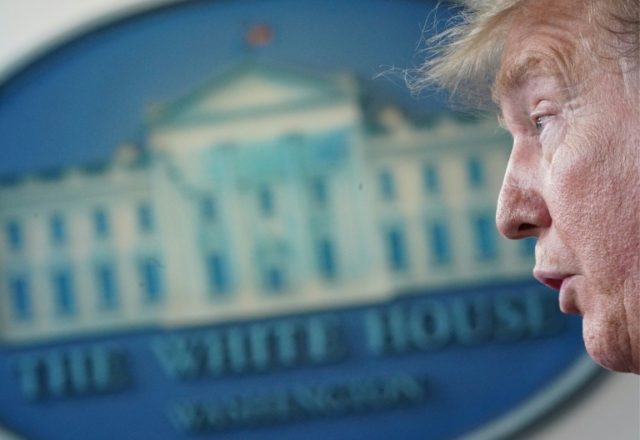 Poll: 65% of Americans Say Trump Was Too Slow to Address Coronavirus

Nearly two-thirds of Americans say President Donald Trump was too slow in taking major steps to address the threat to the United States from new coronavirus, a poll published on Thursday said.

According to the Pew Research Center, 65 percent said Trump was tardy in responding when cases of the COVID-19 illness were first reported in other countries.

He initially downplayed the virus and has been keen to end the resulting lockdowns which have crippled the world’s largest economy.

The Pew survey was conducted April 7-12 among a sample 4,917 American adults.

It found that 52 percent said Trump’s public comments on the coronavirus outbreak are making the situation seem better than it really is.

Trump has been speaking at length during daily press conferences alongside medical experts.

On Thursday he recommended a gradual reopening of the economy, a day after saying “the data suggests that nationwide we have passed the peak on new cases.”

That declaration came on the same day tracking by Johns Hopkins University showed 2,569 US deaths over a previous 24-hour period, the heaviest daily toll of any country.

The Pew survey found that 73 percent of US adults said the worst is still to come in terms of problems the US is facing from the outbreak.

With state governors also working on plans to ease up on economic restrictions, 66 percent said their greater concern is that states will lift restrictions on public activity too quickly.

About half that number, 32 percent, said a reopening will not happen quickly enough.

The COVID-19 novel coronavirus emerged in China in late December. On January 21 US officials announced the country’s first case, and other cases began emerging outside China leading the World Health Organization on January 30 to declare a “public health emergency of international concern.”

Trump, who boasted in January that “we have it totally under control,” did not declare a government initiative to “slow the spread” until March 16.

The United States has more coronavirus deaths — in excess of 30,000 on Thursday — than any other country, according to Johns Hopkins.

Moscow: US Accusing Russia of Missile Tests to Distract From Deployment of American Weapons in Space