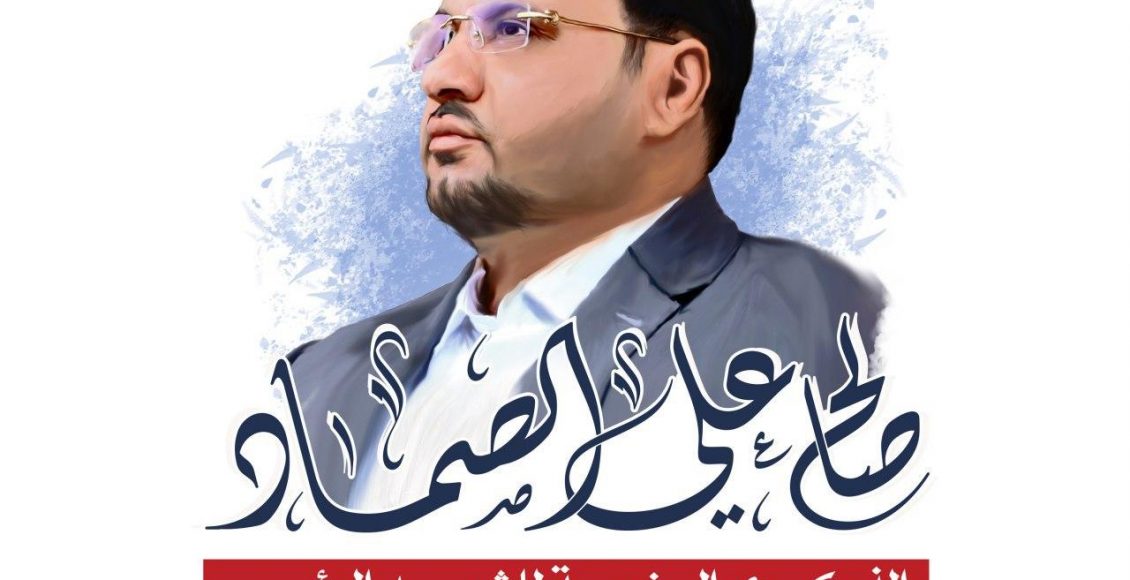 President Al Samad, “the man of peace,” as he was described by the UN special envoy for Yemen Mr. Martin Griffiths. He was the man of determination: a profound personality mixed between a high qualified politician and a humble and pure-hearted Yemeni loved by all sort of citizens.

On Thursday the 19th of April 2018, Saudi-led aggression assassinated the Yemeni President Saleh Al Samad in Hodeidah, Yemen with three airstrikes on his car after delivering his speech to the people.

The Yemeni wisdom and courage — which is known historically for thousands of years and mentioned in the Holy Qur’an, other Holy books, and other historical remains — were embedded in the personality of the martyr president Al Samad.

On the 15th of August 2016, President Al-Samad was elected by the Supreme Political Council which is a coalition of all the political, tribal, and other Yemeni entities standing against the Saudi-led coalition. He was recognized by the Yemeni Parliament after delivering his presidency oath on the 16th of August 2016 which gave him the legal legitimacy of being the president of Yemen. This legitimacy was blessed by the Yemeni people through a massive demonstration supporting the newly established government and the new president Saleh Al Samad while denouncing the Saudi-led aggression.

The demonstration took place in Sana’a on the 20th of August 2016 and annually on the same date in 2017 and 2018. Huge numbers of people from different governates gathered in their capital city delivering to the world a clear message: “we are the Yemeni people who have all the rights to determine our destiny and future. We are the Yemenis whatever you would like to call us. We are choosing our leaders: not the king of Saudi Arabia or any other imperialistic power in the world could make us give up our rights.”

Despite the difficulties because of the aggression and the blockade, President Al Samad worked hard to revive Yemeni institutions including security and Yemeni industries in both civilian and military. The achievement of the historical Yemeni hero President Al Samad was undeniable even by the international entities.

Striving for Public Security in a Country Rife with Conflict

Let’s look at one example. According to a mapping of the Yemen conflict from 2017 by the European Centre of the Foreign Relations, the Yemeni Army and the National Committees — which are under the Yemeni government in Sana’a led by President Al Samad — control the majority of northern Yemen which contain the bulk of population density. Those who live in these areas from Sana’a, Dhamar, Ibb, Amran, Saddah, Hajah, Hudaydah, and so on are the Yemenis who live under one institutional functional government. This government provides them security. The only suffering is because of the deliberate attacks and airstrikes conducted by the Saudi-led aggression in addition to the shortage of food, medicine, fuel, and other human necessities due to the blockade imposed by the Saudi-led coalition.

Other areas under the so-called legitimate government supported by the Saudi-led coalition are divided between many different groups controlling different territories such as Alqaeidah territories in Taiz, Abian, Almukalah, Shabwa, and Albaydah. This also includes mixed-control areas between the Southern Movement and Alqaeidah in Aden and Saiown. To top it off, southern Yemen also has various troops from the Saudi-led collation from Emiratis, and Sudanese (the Janjaweed which are the troops convicted by the ICC because of rape and other war crimes in Darfur, south of Sudan).

Those areas in the south are suffering from the absence of institutions and security. In addition to that, all these different terrorist organizations frequently fight each other. The Special Envoy of the Secretary-General for Yemen was in Sana’a recently and met with all the Yemeni politicians there, including President Al Samad. He couldn’t, however, visit any of the areas that the Saudi-led coalition and their local different groups and mercenaries control as a result of this chaos in these areas.
Despite the Saudi coalition claiming these areas are under their control, the Special Envoy of the Secretary-General for Yemen revealed the reason he did not visit these areas on his official Facebook page. He said that these areas are not secure.

Many other delegations from Europe are operating in Sana’a and many international organizations are working as well in the territories which are under the control of the real Yemeni government in the north. This is because Sana’a has the existence of the security and the institutional Yemeni government under the presidency of the historical martyr and hero Saleh Al Samad.

The Saudi-led coalition’s main purpose in this war is to destroy this existence of a national and sovereign Yemeni state and let the country enter into a chaotic situation with many different groups easy to be controlled and fighting with each other. This is the case in the areas which are occupied by the Saudi-led coalition.

Leading Bravely and Wisely in the Most Difficult Times

The assassination of President Al Samad is only one of many examples of the hatred and instability project that the Saudi-led coalition are having for Yemen. One month before the assassination of President Saleh Al Samad, in one of his public speeches he said:“If Saleh Al Samad is martyred, the next day his kids have to go back to their village because they will not have any place to sleep here, and this is great blessing from God.”

He said that indicating that he is not leaving any material property for his kids and he is willing to give his life for his country.

Rest on peace brave man, you left for your six kids, for all Yemenis, for all free men and women in the world, and for the history an inspiration immortal memory of a legend, a hero, and a martyr Saleh Al Samad, who led his people bravely and wisely in the most difficult times.

Moscow: US Accusing Russia of Missile Tests to Distract From Deployment of American Weapons in Space