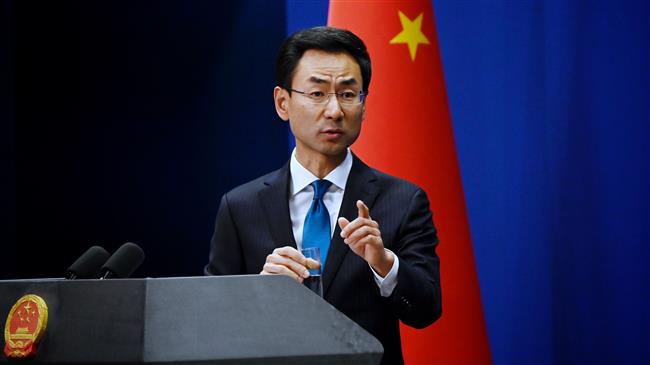 China has blasted the United States for its move to halt funding to the World Health Organization (WHO) amid global fight against the new coronavirus pandemic, saying the measure reflects Washington’s typical hegemonic mindset.

Chinese Foreign Ministry Spokesman Geng Shuang made the comments at a press conference in the capital Beijing on Tuesday, after US President Donald Trump froze his country’s financial support to the WHO over accusations of covering up China’s coronavirus figures.

Washington contributed $400 million to the WHO last year, roughly 15% of its budget.

“The United State believes the WHO should follow its command because it’s the largest financial contributor to the organization. This is a typical hegemonic mindset. The US has decided to halt its funding to the WHO as the organization takes an objective and impartial position instead of pandering to the United States. This is typical threatening and blackmailing,” Geng said.

“The US’s attack and slander on the WHO is ungrounded, and, more significantly, its exertion of pressure and intimidation are unpopular,” he added.

The Chinese foreign ministry spokesman also stressed that Beijing has always thrown its weight behind the “leading role” of the UN body in promoting public health throughout the world.

“China has always firmly supported the leading role of the WHO in promoting public health around the globe. China is also willing to intensify its support for the WHO through multiple channels,” Geng said.

The US’s move to halt funding to the WHO earlier in the month drew harsh international reactions, with the European Union, the African Union, France and Germany criticizing Trump for the abrupt decision.

Trump has on several occasions accused the WHO of siding with China and reliance on Chinese data, blaming it for “all sorts of false information about transmission and mortality” that was circulated amid initial reports on the flu-like pathogen.

The White House has been seeking to deflect criticism of its own sluggish response to the COVID-19 crisis by putting too much emphasis on the virus’s likely origins in China, with Trump and other US officials, including Secretary of State Mike Pompeo, referring to the coronavirus as the “Chinese virus.”

There have been more than 2,550,000 confirmed cases of infection across the world, with the death toll going well beyond 170,000 on Tuesday.

89 violation of the truce agreement on Hodeidah fronts