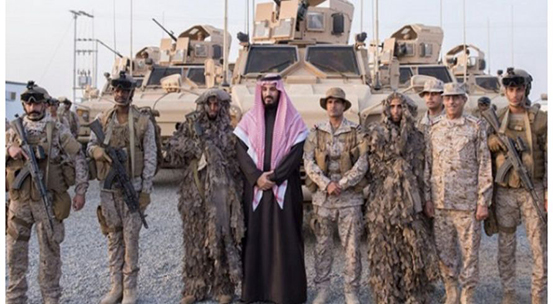 Saudi Arabia And Big Lie of Ceasefire In Yemen

The Saudi-led anti-Yemeni Arab coalition on April 8 announced that it would stop its unceasing attacks on the war-weary Yemen as part of a ceasefire set for April 9. The Saudis said that the unilaterally-announced cessation of the bombing campaign would last for two weeks and it would be extended if it is welcomed by the warring sides.

Despite the claims by the aggression coalition, the attacks over the past week showed no signs of decline and the positions belonging to the Yemeni forces were raided from the air and ground. This is while the civilians, as over the past five years, are still not immune to attacks of the Arab kingdom-headed alliance.

Saudis decline to show commitment to their unilateral truce

Turki al-Maliki, the spokesman to the Arab bloc in Yemen, on Wednesday, April 8 officially declared a truce in the Arab country, adding that it will hold for two weeks and is open to extension should it prove successful.

But the field reports suggest that the alliance forces showed no adherence to the self-declared ceasefire and kept their daily attacks by fighter jets and artillery in a variety of Yemeni regions. Major General Yahya Saree, the spokesman to the Yemeni armed forces, on Sunday said that the Arab coalition continues its strikes on various parts of the country.

In a Twitter message, he said over the last 24 hours the Saudi warplanes launched some 30 air raids in the two provinces of Ma’arib in the center and Al-Jawf in the north, where recently Yemen’s army liberated large tracts of land from the grip of the coalition and its mercenaries.

Yemen’s Al-Massirah news network on Sunday night, citing military sources, reported that the aggression forces violated the truce 68 times on Hudaydah front over the past 24 hours.

The spokesman to the Yemeni forces on Monday held that the Saudi warplanes over the past 24 hours struck 10 times Khab and Al-Sha’af districts in Al-Jawf, 17 times Majzar district, and 3 times Sarwah district in Ma’arib province. Saree added that the bombings killed a child, a teenage girl, and a woman, beside wounding a man.

According to Al-Massirah, the Saudi forces and their allied mercenaries violated the truce by 26 times of artillery attacks and 41 times of shootings in various regions.

In response to the claimed cessation of the attacks, the National Salvation Government (NSG) in the capital Sana’a released a document in which the Saudis are invited to lift the several-year all-out sea, air, and ground siege on Yemen, compensate the heavy destruction caused by their air campaign, pay expenses of the NSG for 10 years, and recognize Ansarullah as the legal government in Yemen.

Why does the Saudi coalition not adhere to the ceasefire?

Ali al-Emad, a member of Ansarullah political office, earlier in an interview said that intelligence and field developments indicate that the Saudi’s main aim behind the suggestion of the truce is buying the time Riyadh badly needs. “The kingdom is playing with the ceasefire card,” he added.

Talking to the Al-Ahd news website, al-Emad said that since the ceasefire was announced Saudi Arabia opened four new fronts, with the first three being in Ma’arib, Al-Jawf, and Taiz. “The fourth front is Al-Bayda province,” he went on, adding: “It is preparing to open a new one in Makiras district also in Al-Bayda.”

The Yemeni official further held that over the recent weeks and mainly following the frequent Yemeni army’s advances in Naham and Al-Jawf, the army moved to liberate Ma’arib in its entirety.

“Responding to this pro-liberation campaign, the Saudis mobilized their media, their diplomats, and even their mediators and journalists to mediate in a bid to check the fast advances of the Yemeni army,” al-Emad told the news outlet.

He further said that the mediation and negotiations with all members of the Ansarullah political office have been unprecedented. Even the UN special envoy to Yemen conflict Martin Griffiths in person traveled to both Sana’a and Riyadh and met Ansarullah’s leader Abdul-Malik Badreddin al-Houthi to talk a solution to the crisis, now in its fifth year.

So, it seems that despite the Saudi allegations and the heavy propagandistic campaign surrounding the ceasefire, since the beginning Ansarullah was aware that the Saudi truce was just a propagandistic show.

Not only the Saudis are not committed to their unilateral ceasefire but also amid the global media involvement with the coronavirus outbreak they are filing their arsenal with new weapons from its Western arms suppliers for use in the war against the Yemenis.

Yemen’s foreign ministry on Monday regretted a decision by some Western countries to resume their weapons deliveries to Saudi Arabia and its ally the United Arab Emirates.

“The resumption of arms deliveries reveals that the claims about the Arab coalition’s interest in peace and ceasefire are just bogus,” the ministry’s statement read.

The Sana’a-based administration condemned the Western excuses that the resumption of the arms sales to Riyadh is to raise cash to cover the economic damages caused by the COVID-19 pandemic, reminding that the solution for tackling the pandemic-caused economic crisis is not selling arms to countries that commit crimes against humanity in the war. It further called on the international community to press for ending the war and cooperate to contain the infectious disease.

The ministry further called on the parliaments, legal organizations, and human rights activists to press their countries to “stop new arms sales to the aggression countries.”

Therefore, with regard to the lack of commitment to the self-declared Saudi ceasefire and the records of violation of the past ceasefire deals by the Saudi forces, it appears that the only way of forcing the Saudi-led coalition to stop its hostilities and exit from Yemen is Sana’a’s massive military response.

Sayyed Nasrallah: Holy Month of Ramadan an Opportunity to Get Closer to Allah

Pompeo recognizes that the aggression against Yemen is an American project