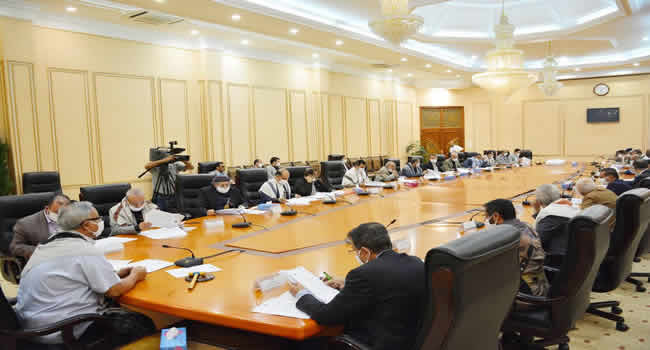 A number of measures to support the health sector by providing basic emergency needs related to confronting Corona was approved by the Higher Ministerial Committee for Epidemics Control, in its meeting Monday chaired by Prime Minister Dr. Abdulaziz bin Habtoor.

This came in light of the Committee’s discussion of the report of Minister of Public Health and Population Dr. Taha al-Mutawakkil in this aspect.

The meeting touched on ways to enhance the health, treatment, and equipment capabilities of the Ministry of Health and its institutions, especially with regard to fever testing devices for suspected cases of Coronavirus infection and respirators and medical solutions and providing oxygen by establishing a new factory.

The Committee , in its meeting, reviewed the latest developments related to anti-Corona efforts at the national level, and the recent developments in the occupied provinces.

It in addition dealt with the report of Deputy Prime Minister for Services and Development, Dr. Hussein Maqbouli on the various procedural and field operations related to the implementation of precautionary measures in its administrative and technical aspects to face any emergency related to this epidemic.

The meeting, in the presence of Governors of Aden, Lahj and Dhalea provinces, discussed what the southern and eastern provinces under the occupation are witnessing in light of the declaration of state of emergency in Aden by the so-called separatist southern transitional council.

In this regard, the meeting stressed that all the agreements and steps taken by the countries of aggression and occupation or the traitor components and those cooperating with them in the occupied provinces and areas do not concern the Yemeni people, not from near or far.

The meeting affirmed that the Yemeni unity alone is capable of creating stability for the entire Yemeni homeland and serving security and stability regionally and internationally.

An unholy union between Saudi-led Coalition and terrorism against Yemen