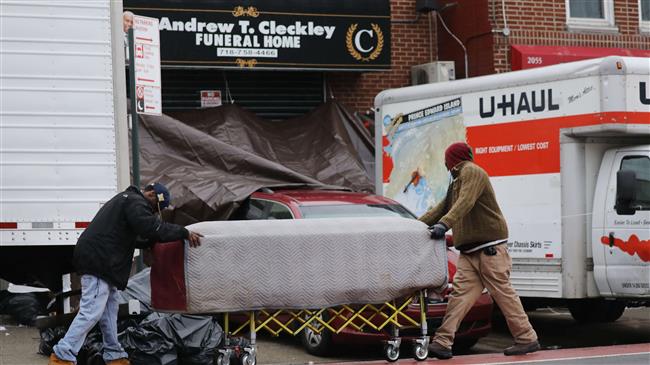 Trump Increases His Estimate of COVID Deaths in US to 100,000

US President Donald Trump on Friday increased his estimate of possible deaths in the United States from the coronavirus, telling a White House event he hopes for less than 100,000 fatalities, a higher upper limit than the 60,000 to 70,000 deaths he discussed on Monday.

“Hopefully we’re going to come in below that 100,000 lives lost, which is a horrible number nevertheless,” Trump said.

Projections have varied for how many lives COVID-19, the respiratory disease caused by the novel coronavirus, would claim. Anthony Fauci, a top infectious disease official, had said in March that Americans should be prepared for 100,000 deaths.

On Wednesday the number of deaths passed 60,000, eclipsing the number of Americans killed in the Vietnam War. By Friday afternoon, at least 63,260 people had died, according to a Reuters tally of state and local government reports.

More than 3.8 million laid-off workers applied for unemployment benefits last week as the U.S. economy slid further into a crisis that is becoming the most devastating since the 1930s.

Roughly 30.3 million people have now filed for jobless aid in the six weeks since the coronavirus outbreak began forcing millions of employers to close their doors and slash their workforces. That is more people than live in the New York and Chicago metropolitan areas combined, and it’s by far the worst string of layoffs on record. It adds up to more than one in six American workers.

With more employers cutting payrolls to save money, economists have forecast that the unemployment rate for April could go as high as 20%. That would be the highest rate since it reached 25% during the Great Depression.

This week, the government estimated that the economy shrank at a 4.8% annual rate in the first three months of this year, the sharpest quarterly drop since the 2008 financial crisis. Yet the picture is likely to grow far worse: The economy is expected to contract in the April-June quarter by as much as 40% at an annual rate. No previous quarter has been anywhere near as weak since the government began keeping such records after World War II.

As businesses across the country have shut down and laid off tens of millions of workers, the economy has sunk into a near-paralysis in just a few weeks. Factories, hotels, restaurants, department stores, movie theaters and many small businesses are shuttered. Home sales are falling. Households are slashing spending. Consumer confidence is sinking.