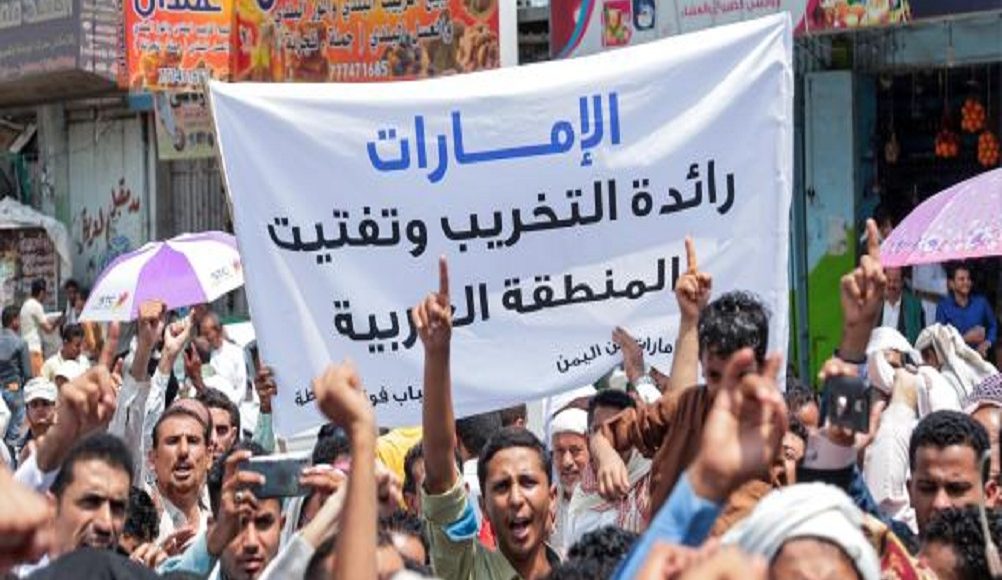 A newspaper report, on Sunday, revealed the long history of the UAE in support of the division of Yemen since 1994, where it worked to incite its separatist militias and finance them with money and weapons to spread chaos and sabotage to gain influence and economic interests.

The London-based Alquds Alarabi newspaper said that the UAE is supporting and sponsoring the separatist project in southern Yemen, represented by the so-called Southern Transitional Council (STC), which was established in May 2017 with direct support and supervision from Abu Dhabi. At that time, it assumed the political and military administration for most of the southern provinces and the western coast of Yemen.

The report added that the UAE support included establishing and arming of military and security forces in the areas controlled by the STC, providing political support to the council inside Yemen and marketing the separation project abroad.

“A few days ago, the STC announced the self-rule of the southern governorates, on April 25th, by its leadership, most of whom reside in the Emirati capital Abu Dhabi,” it added. “This announcement is believed to have been made at the behest of Emirati, or without any objection. Although this announcement did not reach the point of announcing the secession, it is a step in this way and a strong indication of the UAE’s desire to implement the secession process in southern Yemen in the future.”

The newspaper added that the difficult question to answer is the reasons behind the Emirati desire to support separation and the difficulty here is due to the absence of the real and clear interest that the Emirates can derive from the separation process, not to mention the risks and damages that will be caused as a result of continuing to support a project secession, which includes financial, political, moral, and possibly security burdens. These burdens will increase in the future, given the difficulty of the separation process at present and at least for the foreseeable future.

The report stressed that the secession project will create a conflict of interests between the UAE and Saudi Arabia, which is not in the latest interest, at least for the time, because it prevents it from defeating or weakening the forces of the Sana’a government. Moreover, the deterioration of the relationship between the two countries will weaken and isolate the UAE after losing its most important ally in the region.

The newspaper touched on that the ruling elite of the Emirate of Abu Dhabi were influenced with the view of South Yemenis, many of whom hold Emirati citizenship. They are close to the political decision-maker and have had a strong presence in the emirate for a long time and their presence was reinforced by Abu Dhabi receiving most of the southern leaders after the 1994 war, which prompted it to intervene in Yemen.

According to this analysis, this group was able to draw Abu Dhabi policy towards Yemen according to its perceptions, which are based on the idea that the Yemeni unity was against the interest of the southerners and that its continuation means the domination of the northern majority and the exclusion of southerners from power and wealth and making them subordinate to the northern ruling elites.

The newspaper revealed that Dubai does not seem enthusiastic about the external interference of the UAE in Yemen, since this policy has caused great damage to its economy in recent years. It is expected that it will be more affected if the state of instability and chaos continues in Yemen.

The newspaper emphasized that the Emirati interference in Yemen is an economic burden on it, whether it is with the current situation of Yemen or with the separatist one.

Norwegian Journalist Likens Trump to Hitler: “A Tarzan against Corona”