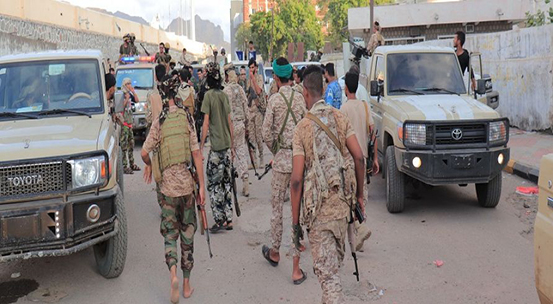 Most optimists could not have expected that a day would come when Al Zayed and Al Saud would mess with the fate of Yemen, which, since their aggressive war against the country, has turned into something like “the house of the madmen”, no one knows with whom he fights, nor against whom, even the aggressors do not know who they are with and against whom. The chaos of the gun began to infect everything, everyone conspired against everyone. It is very natural that the war which has not clear goals to have such outcomes

Today, the Southern Transitional Council (STC) in the Yemeni city of Aden announces the formation of a self-administration rule, in the strictest sense a separation from Yemen, where this matter was done with the blessing of the Al Saud, especially if we know that the Riyadh agreement, which was included in the Al Saud implementation, prevents any form of separation. However, it is the Al Saud authorities that prevent the Hadi forces from reaching the city of Aden and stand up to the UAE-backed Aidarous al-Zubaidi.

State within a state

Since the beginning of the aggression against Yemen and the occupation of the coastal city of Aden, it was clear that there were a number of separatists who wanted to create a new Yemen. It is an old dream that was often sought by them, but the statements of the aggressors at that time, Saudis and Emiratis, were trying to hide this fact, but the days exposed those dreams, the aggressors are obliged to find justifications for the steps of the separatists by informing the separation from Yemen and their formation of southern Yemen.

The Hadi government, funded by Al Saud after Hadi and his government fled to Saudi Arabia, appeared today with the separatists announcing their expected step, like someone who swallowed a sharp knife from both sides. It cannot scream from the pain of the separatists’ move, nor can it scream in the face of Al Saud over the great treachery movement that resulted in the separation process.

More than one hundred thousand dead; the worst humanitarian catastrophe the world witnessed, not to mention the return of diseases that had become extinct decades ago. This is what the aggression of Al Saud and Al Zayed caused in Yemen. Today, the news from there says that they are looking for a way to get out from the Yemeni quagmire, as it is clear that they have accomplished the mission they started in: namely, the division of Yemen. The Al Saud forces worked to delay the arrival of the Hadi forces to Aden until the completion of arrangements for the declaration of self-rule, which is a process of actual separation, but Aidarous Al-Zubaidi depicts it as a process of autonomy. This is the project that the United Arab Emirates started, while Al-Zubaidi and the rest of the mercenaries implemented it, taking advantage of the power of the Al Saud and their control over the Hadi forces to pass this project.

Socotra archipelago is also now threatened by another secession process, day after day the media reports news about the UAE -backed militias trying to fabricate clashes with Hadi’s forces present in the region. It is no secret to anyone about Al Zayed’s greed for this archipelago, as it is considered the key to the Red Sea and Gulf of Aden.

The UAE’s move was faced by Al Saud. They will in no way allow anyone else to control this archipelago because of its great geographical importance and for this reason the UAE is trying to compete with Saudi Arabia over this archipelago, it is sending daily more reinforcements to the forces that it supports, accompanied by forces of the STC, which Saudi Arabia rejects altogether.

Riyadh knows very well the importance of Socotra island, if it controls the island, it will be able to promote global maritime trade for Saudi Arabia, especially as it suffers from the collapse of oil prices. The island’s ports also secure Saudi control of the Horn of Africa and the Red Sea, which will not be ceded to the Emirates.

Perhaps the UAE was the fastest. It established a military base on the island, which will enhance its control over the Red Sea regions, especially as this base is adjacent to the UAE’s presence in East Africa, which will contribute to strengthening the UAE’s control of the Red Sea and Bab al-Mandab.

Accordingly, it is not unlikely that we will witness a future war to control the seaports and international trade routes in Yemen. In the end, we can confirm what we said earlier: day after day, the objectives of the coalition of aggression led by Al Saud and Al Zayed become clear, it does not want to support the alleged legitimacy, nor does it want to preserve a unified Yemen. It wishes to divide Yemen not only into southern and northern, but rather if it could, it would divide it into twenty Yemens, so that it could be easier to control, to implement the will of their grandfather Abdul Aziz Al Saud when he said: “The glory of Saudi Arabia is in the humiliation of Yemen and the humiliation of Saudi Arabia is in the glory of Yemen.”

How Did Military Situation Explode in Yemen’s Socotra?

Tribe of Ibb provides battlefronts with a financial convoy

Hodeidah.. A tribal stand in 16 Kilo denouncing the burning of the Qur’an