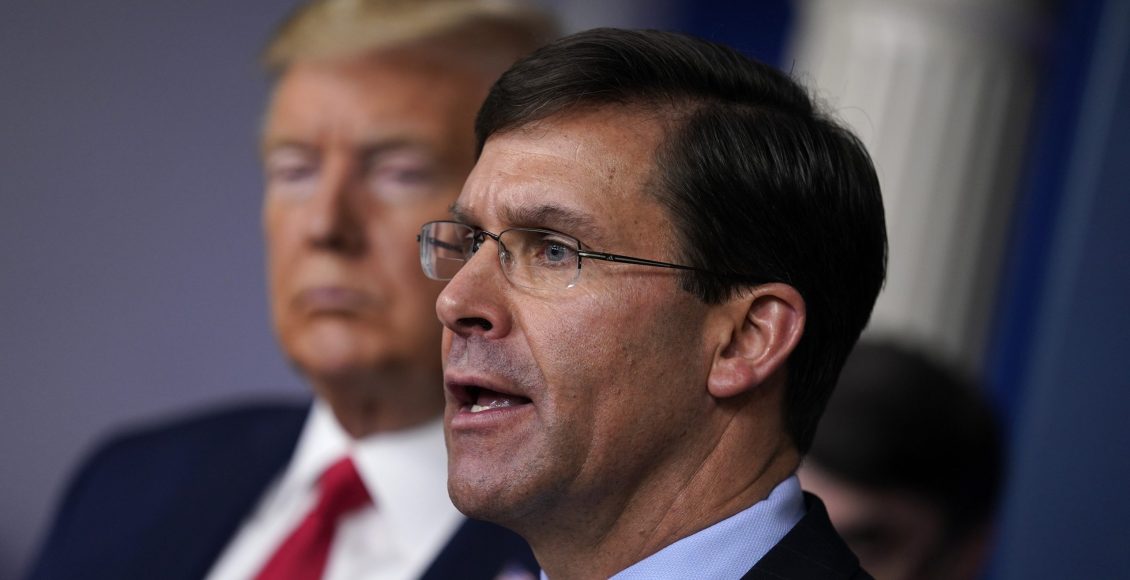 The US government’s $3 trillion effort to rescue the economy from the coronavirus crisis is stirring worry at the Pentagon. Bulging federal deficits may force a reversal of years of big defense spending gains and threaten prized projects like the rebuilding of the nation’s arsenal of nuclear weapons.

Defense Secretary Mark Esper says the sudden burst of deficit spending to prop up a damaged economy is bringing the Pentagon closer to a point where it will have to shed older weapons faster and tighten its belt.

“It has accelerated this day of reckoning,” Esper said in an Associated Press interview.

It also sets up confrontations with Congress over how that reckoning will be achieved. Past efforts to eliminate older weapons and to make other cost-saving moves like closing under-used military bases met resistance. This being a presidential election year, much of this struggle may slip to 2021. If presumptive Democratic nominee Joe Biden wins, the pace of defense cuts could speed up, if he follows the traditional Democratic path to put less emphasis on defense buildups.

After Congress passed four programs to sustain the economy through the virus shock, the budget deficit — the gap between what the government spends and what it collects in taxes — will hit a record $3.7 trillion this year, according to the Congressional Budget Office. By the time the budget year ends in September, the government’s debt — its accumulated annual deficits — will equal 101% of the US gross domestic product.

Rep. Ken Calvert of California, the ranking Republican on the House Appropriations defense subcommittee, says defense budgets were strained even before this year’s unplanned burst of deficit spending.

“There’s no question that budgetary pressure will only increase now for all segments of our federal budget, including defense,” Calvert said.

For military leaders, the money crunch poses an economic threat that could undermine what they see as spending crucial to US security.

One prominent example is the Trump administration’s plan — inherited from the Obama administration — to pour hundreds of billions of dollars into replacing every major element of the nuclear weapons complex, from some of the warheads designed and built by the Energy Department to the bombers, submarines and land-based missiles that would deliver the warheads in combat.

Until now there has been a consensus in Congress supporting this nuclear modernization program, which includes replacing the aged communications systems that command and control nuclear weapons. Some House Democrats sought last year to block funding for the next-generation intercontinental ballistic missile, to replace the Minuteman 3, but they gave in and the project survived.

Nuclear modernization is a fat target for budget cutters. Mackenzie Eaglen, a defense specialist at the American Enterprise Institute, foresees the possibility of calls by some in Congress to reduce the planned fleet of Columbia-class nuclear ballistic missile submarines from 12 to perhaps nine. The Navy has estimated the total cost of this program at about $110 billion, with each boat costing $6.6 billion.

The Navy several years ago accepted a two-year delay in the Columbia program, and according to a Congressional Research Service report last month, the first sub is now scheduled to enter service in 2031 and the number of subs in the fleet will drop to 10 for most of the 2030s as the current fleet of Ohio-class subs is retired.

Esper says nuclear modernization, at a price approaching $1 trillion, is too important to put off, even in an economic crisis.

“We’re not going to risk the strategic deterrent,” he told a Pentagon news conference May 5, referring to the overall nuclear arsenal, whose stated purpose is to deter a nuclear attack on the US or its allies. “My inclination is not to risk any of the modernization programs. It’s to go back and pull out more of the legacy programs.”

But others, including supporters of nuclear modernization, say it’s an obvious target for reductions. The Congressional Budget Office has estimated the first 10 years of the modernization plan will cost nearly $500 billion, and that over a 30-year span the total would hit $1.2 trillion, including the cost of sustaining the current force.

In all, the administration’s proposed nuclear weapons budget for 2021 would approach $46 billion.

“There’s going to be a temptation to cut crucial programs like this because of the trillions and trillions of dollars that are being borrowed for the coronavirus stimulus,” said Fred Fleitz, president of the Center for Security Policy. He supports fully rebuilding the nuclear weapons complex.

If Esper succeeds in shielding nuclear modernization, he likely will have to overcome obstacles to accelerating the elimination of older weapons programs, all of which have political constituencies.

Even the oldest of the Air Force’s aircraft have their strong defenders on Capitol Hill. For example, Sen. Martha McSally, an Arizona Republican and former Air Force pilot, has already reminded Air Force leaders she will fight reductions in A-10 Warthog planes. She said the Pentagon’s 2021 budget proposal would “prematurely phase out” 44 of those planes, which are used for supporting ground troops and first entered service in the 1970s.

Among other candidates for a faster phasing out or retirement are the B-1 non-nuclear bomber and the Air Force’s MQ-9 Reaper attack drone. The Reaper is vulnerable to modern air defenses. Other candidates are the Army’s Bradley Fighting Vehicle, which may give way to a new-generation combat vehicle, and some older Navy warships.

In the face of these pressures, many in Congress are already brushing off the idea that the coronavirus crisis should force a spending slowdown. Sen. Roger Wicker, a Mississippi Republican whose state is home to a major shipbuilding facility at Pascagoula, advocates for a $20 billion boost to the Pentagon budget.

“In terms of the $3 trillion we’ve spent on our economy, it strikes me it’s a relative bargain to try to come up with $20 billion, only $20 billion, to get us back where we need to be where the top military leaders in our country tell us will keep us safe,” Wicker said at a hearing last week.

It Is the Curse of Yemeni Children, Al Saud’s Economy Dries up