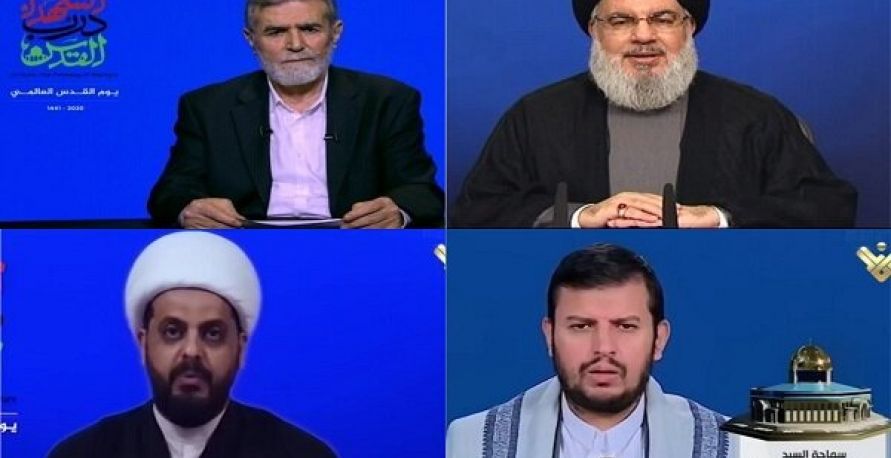 Leaders and figures of Resistance Front delivered seperate speech on Wednesday on the occasion of the International Quds Day.
The remarks are aired by UNews. Here is the gist of what these key figures said during their address. Other key figures such as Seyyed Hassan Nasrallah, Sheikh Isa Ahmed Qassim, and Ziyad Al-Nakhaleh among others will each deliver a speech.
Head of Hamas Political Bureau Ismail Haniyeh
The Islamic Republic of Iran has shown all-out support for Palestine, he said.
He went on to say that Palestine is facing dangerous challenges as the so-called Deal of Century is seeking to destroy the Palestinian cause.
Haniyeh warned the Zionist regime of any crime or stupid act, noting that Quds is on the center of threats, facing exposed to Judaization and changes by the Zionists.
Archbishop of Sebastia Atallah Hanna
Hanna said that any aggression against Quds is aggression against “our faith and history”. “We will not ignore Quds despite all conspiracies.”
He called on the Islamic Ummah to not leave Quds alone, adding that there is no power in the world that can damage the holy Quds.
“Occupation is more dangerous than coronavirus,” he said, noting that the Israeli occupation will certainly end and Palestinians will be allowed to return to their own country.
Former Head of the Iraqi Sunni Court Abdul Latif Al-Humim
Quds will not be liberated without resistance, al-Humim said. No one should think that Quds is for sale or it cannot be liberated, he added.
It is very sad that some Arab countries condemn those who stand against occupiers, he said.
He stressed on the prohibition of normalizing ties with the Zionist regime, noting that such an act is a betrayal to aspirations of the Islamic Ummah.
Bahrain’s leading Shia cleric Ayatollah Sheikh Isa Ahmed Qassim
The International Quds Day is very important for maintaining the unity of the Islamic Ummah, Qassim said.
Efforts to form a coalition with the Zionist regime are in line with helping the enemies of the Arab and Islamic Ummah, he added.
“Currently, we are witnessing an increase in media activity regarding the normalization of ties with the Zionist regime and to succumb to the demands of the United States and the Zionist regime.”
The people of Bahrain have had a stable position in their history and in the history of their revolution for the support towards the resistance and unity of the Islamic Ummah, he added.
Secretary-General of Asa’ib Ahl al-Haq in Iraq Qais Khazali
The Zionist regime is harmful to all the Arab and Islamic world and the issue is not limited to Palestine, he said, pointing to the importance of the Palestinian issue for all the world.
The Palestinian cause found a special position among the Islamic Ummah as soon as the Zionist regime was established, he said.
Leader Sayyed Abdulmalik Badreddin al-Houthi
The main reason for the assassination of Lieutenant General Qassem Soleimani was his role in the fight against Zionism, said Sayyed Abdulmalik. “Martyr Soleimani played a major role in the fight against the Zionist enemy and the US.”
Sayyed Abdulmalik noted that Ansarullah considers any effort to normalize ties with the Israeli regime as condemned and prohibited.
Secretary-General of Islamic Jihad Movement of Palestine Ziyad Al-Nakhaleh
Designating a special day for Quds by Imam Khomeini shows that Palestine is not a domestic issue, rather an issue related to all the Islamic Ummah, he said.
Those governments that ban any anti-Israeli activity on this day, with the excuse that this is an Iranian day, are doing Israelis a favor, Al-Nakhaleh said, noting that such governments don’t want the Quds.
“We believe that resistance is moving in the right direction, this is the only way to freedom and dignity. We are ready to carry out a long jihad that will ultimately lead to a definite victory,” he added.
“This victory can only be achieved by uniting Islamic and national groups, otherwise the internal disputes will end in favor of the Zionist enemy; we must unite based on the rule of national resistance,” he said, pointing to the need for standing against American plots, especially the Deal of the Century.
“Those who say that the US can do anything have actually surrendered to the enemies. Our nation can destroy the deal of the century.”
Lebanese Hezbollah Resistance Movement Secretary-General Hassan Nasrallah
The movement is committed to supporting the oppressed people of Palestine, Nasrallah said.
“We won’t abandon Al-Quds at any cost,” Almanar quoted him as saying.
Those who are seeking to normalize ties with Zionist entity don’t represent the real image of our Ummah, he said, adding that Zionist officials are concerned over the military buildup of Resistance factions across Arab and Muslim countries.
“This year we miss one of the major commanders who fought for Al-Quds, Haj Qassem Soleimani. We promise Haj Qassem to liberate Palestine and pray in Al-Quds,” he added.
Sayyed Nasrallah also called for commemorating Al-Quds Day by all possible means in light of coronavirus pandemic.
Source: U-feed

17 Airstrikes on Marib, Al-Jawf, Saada, and Asir, and 210 violations in Hodeidah