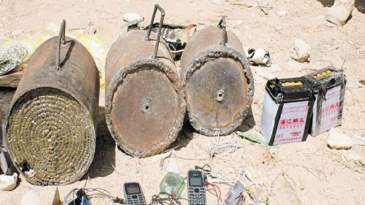 Ministry of Interior of the National Salvation Government announced Thursday night that it was able to thwart a major terrorist crime targeting civilians in al-Bayda province before it was carried out.

“The security services managed to dismantle three explosive devices, which were planted by the aggression elements (loyal to Saudi-led coalition) in al-Bayda province,” the ministry’s spokesman Brigadier Abdelkhaleq al-Ajri said.

He explained that “one of the explosive devices was planted near Al-Wehda Hospital in Bayda city to target citizens.”

It seems that the coalition led by Saudi Arabia and the UAE has renewed betting on members of the so-called “Al-Qaeda” organization in al-Bayda, as part of its military escalation in the province recently.

The aggression continues to hold dozens of fuel, food ships

Air raids on Marib, Saada and Al-Bayda, and 416 violations recorded in Hodeidah

The Defense Minister visits Raghwan Front and affirms, “The invaders are weak , and…