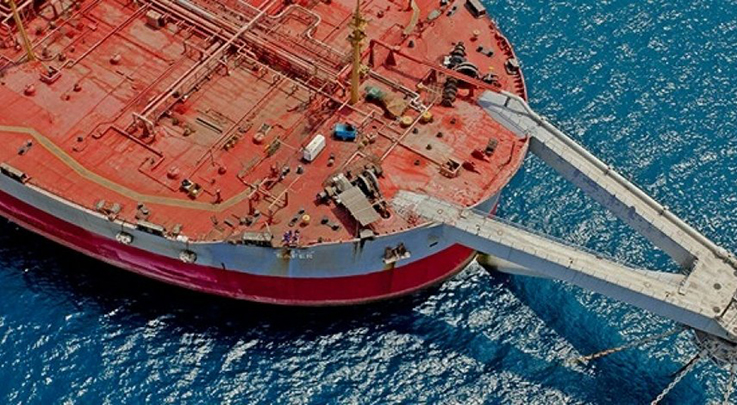 Saudi-led aggression and the United States are seeking to hold Ansarullah responsible for any possible environmental catastrophe in the Red Sea and its consequences as a result of the leakage or explosion of the Safer floating storage near the Ras Issa port in the city of Hodeidah, west of the country.

These attempts come at a time when the leaders of Ansarullah warned of the repercussions of any possible leakage from the Yemeni “Safer” tanker, warning that this threatens an imminent environmental disaster due to an oil spill, reaching the Mediterranean and the Arabian Sea.

The head of the National Delegation Mohammed Abdulsalam had blamed the forces of US-Saudi aggression for all the consequences of any leakage from the Safer floating storage.

“From an early stage, we have been calling for the maintenance of the Safer tanker, but the US-backed forces of aggression have deliberately, with its unjust besieged, put obstacles and prevented any maintenance,” Abdulsalam wrote in a post published on his Twitter page. “The forces of aggression bear all the consequences of any leakage.”

Leaked photos circulated by Yemeni activists showed the catastrophic situation inside the Safer floating storage that the coalition countries refuse the entry of the technical team entrusted with maintenance work according to the United Nations, to carry out the maintenance of the Safer tank, which contains an amount exceeding more than one million barrels of crude oil. This threatens an imminent environmental disaster due to an oil spill that may reach the Mediterranean and the Arabian Seas.

The Safer, once Yemen’s main oil export facility, is a floating storage and offloading vessel moored about 50 kilometres north-west of Yemen’s port city of Hodeidah, the entry point for most of the  country’s humanitarian aid and imports. It contains more than 147 million barrels of crude oil and has had no maintenance for nearly five years, allowing explosive gases to build up in its storage tanks.

The Safer found itself with its large crew in a state of siege within the massive siege imposed on Yemen, which caused the suspension of its activity and then prevented the supply of the necessary fuel for its operation. Experts have been warning for more than a year that the vessel needs urgent maintenance, with a report by the US think tank the Atlantic Council calling it a floating bomb.

On the other hand, the pro-aggression,  Riyadh-based government of exiled Yemeni President Abd Rabbuh Mansur Hadi, has reiterated its warnings against possible disastrous consequences of the explosion or spill at Safer offshore oil platform, which floats off Hodeidah’s northern Red Sea coast.

Information Minister Muammar al-Eryani in the Hadi government, in a statement, has renewed the warning of the dangers of the biggest environmental disaster in the history of the world due to the leakage or explosion of the tanker, stressing that the leakage of 138 million liters of oil in the Red Sea would lead to closing Hodeidah port for several months, which would cause shortages in fuel and needs, as well as a rise in fuel prices by 800 percent and the doubling of the prices of goods and food.

Eryani noted that such an explosion will cost Yemeni economic fishing stocks $60 million a year or $1.5 billion over the next 25 years, adding that the possibility of the oil tanker’s burning would affect three million people in Hodeidah. “500,000 people who work in the fishing sector will need food aid, while fish stocks may take 25 years to recover.”

He pointed out that this would be four times worse than the 1989 Exxon Valdez oil spill disaster in Alaska, stressing that the region still did not fully recover after almost 30 years from the incident.

According to Eryani, when the toxic gas mixes with rainwater from the fire, it may end up in the aquifers, which would lead to slow poisoning and health problems for six million people. Also four percent of the productive agricultural land in Yemen will be covered with black clouds, which would kill the estimated $70 million-worth grains, fruits, and vegetables.

Eryani stressed that the environmental catastrophe that will result from the leakage or explosion of the tanker will not be limited to Yemen, but will also include countries bordering the Red Sea and Gulf of Aden and the international trade movement in the Strait of Bab Al-Mandab and the Suez Canal, in addition to the massive destruction of the marine environment along the coastal strip between them and its effects For decades to come.

The head of the National Delegation Mohammad Abdulsalam also affirmed that Washington also bears responsibility for providing political cover and military support for the continuation of the aggression and the siege.

For his part, the Minister of Oil and Minerals in the National Salvation Government in Sana’a, Ahmed Dares, has renewed the call for the United Nations to put pressure on the aggressive coalition to allow the emptying of the Safer floating tank off the coast of Hodeidah.

The Minister of Oil stated in a statement that the floating tank, which carries more than a million barrels of crude oil, has become a time bomb that threatens the marine environment.

He pointed out that the aggression is still preventing the emptying of the quantity or carrying out maintenance of the tank despite the attempts of the Ministry of Oil to carry out maintenance, but the aggressive coalition refuses entry of the technical team assigned to it in the eyes of the United Nations, which threatens an imminent environmental disaster due to an oil leak that reaches the Mediterranean and the Arab Sea .

Meanwhile, the Minister of Foreign Affairs of the National Salvation Government denounced what was stated in the US State Department statement regarding the Safer floating storage and its accusation that the authorities in Sana’a are responsible for the leakage from the tanker anchored off the coast of Hodeidah.

Eng. Hisham Sharaf stated, in a statement to Saba News Agency, that the authorities in Sana’a had previously requested more than once from the United Nations, its organizations and specialized agencies in Yemen to send an evaluation and maintenance team to the floating oil tank, Safer, to assess the situation and perform the required maintenance.

He pointed to the necessity of dealing with this file in a purely environmental and technical manner, noting that previously there were alternatives for dealing with oil stored in the tanker Safer.

“There was a suggestion to sell the quantity and benefit from it in relief and humanitarian fields, so that the quantity is gradually emptied in order to avoid an environmental disaster at sea, but the position of the coalition of aggression and its bad intentions to use this file led to a delay in arriving at a solution that guarantees its completion in a safe technical and professional form,” he said.

Minister Sharaf pointed out that the National Salvation Government had repeatedly warned, through the Ministry of Foreign Affairs and its memos to the Security Council and many other countries and parties concerned, about the possibility of a leakage from the floating tank as a result of the ship’s worn out and the aggression’s prevention to carry out any maintenance for years.

He pointed out that it is the forces of the aggressive coalition that impose a blockade applied to Yemen by land, sea and air and prevent access to the tanker Safer or even the maintenance of it.

The Foreign Minister once again held the countries of the aggression fully responsible for any oil spill from the tanker Safer or trying to use this file in any reckless aggressive military action. He explained that this will lead to the largest oil leakage in the world and severe environmental repercussions that will harm Yemen and primarily the countries of the region.