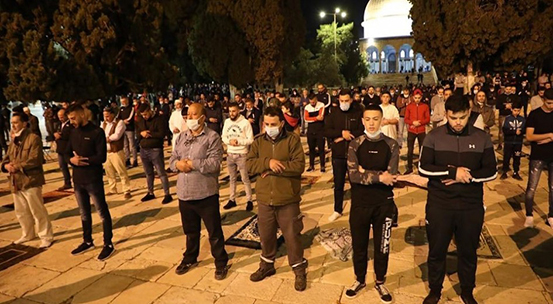 Al-Aqsa holy mosque compound, Islam’s third holiest site, reopened on Sunday after being closed for over two months because of the coronavirus pandemic.

Dozens of worshippers in protective masks were let into the compound before the first prayers of the day, held in cool and windy conditions.

Chanting “God is greatest, we will protect Al-Aqsa with our soul and blood”, the worshippers who gathered in front of the large wooden doors were welcomed by mosque director Omar al-Kiswani, who thanked them for their patience.

As part of ongoing efforts to tackle the virus, worshippers’ temperatures were taken and staff distributed masks to those entering the compound. Tape inside the mosque and on the stones outside marked where people should pray at a safe distance.

Also on Sunday, dozens of Zionist settlers stormed the holy compound, following calls to hold Jewish prayers there a day earlier. The settlers were backed by occupation forces who were stationed at the gates to the site.

The religious site, which houses Al-Aqsa mosque and the Dome of the Rock, had closed its doors in March as part of measures to limit the spread of COVID-19.