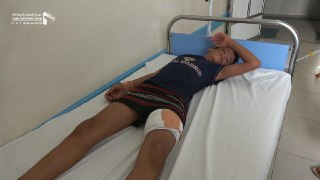 Ministry of Public Health and Population on Sunday condemned Saudi-led coalition’s artillery shelling on Al-Zohor neighborhood in al-Hali district of Hodeidah province, which resulted in the death of four cavilings and wounding 18 others.

The ministry said, in a statement, that the mercenaries’ attack on Al-Zohor neighborhood with several shells and heavy and medium weapons resulted in the death of four citizens and the injury of 18 others, many of them in critical conditions, in addition to the destruction of citizens’ property and homes.

The statement noted that this crime is one of the flagrant violations of the Stockholm Agreement committed in front of the eyes of the United Nations and the international community.

The ministry stressed that this crime reflects how reckless the Saudi-led aggression and its mercenaries with Yemeni blood.

“The aggression forces have not only tightened the blockade on Yemen for more than five years and spread them to epidemics, malnutrition and chronic diseases but have continued to direct their weapons against the Yemeni people, who have been suffering for more than 62 months as a result of the blockade and aggression,” the statement read.

The statement held the United Nations and its organizations responsible for every drop of bloodshed by the coalition of aggression in Yemen.

Clashes outside White House as US Cities under Curfew