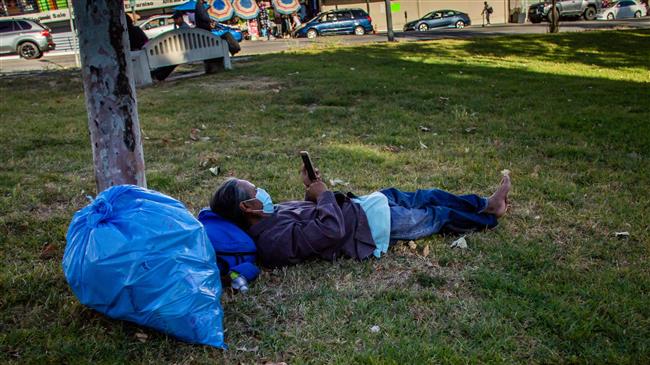 Latest official figures have shown that a record number of Americans will face hunger this year as the economic fallout due to the new coronavirus pandemic is expected to leave tens of millions of people unable to afford daily meals.

About 54 million people across the US could starve this year without help from food banks, food stamps and other aid following the virus-related economy fallout, according to an analysis by Feeding America — the national food bank network.

The analysis underlined that demand for aid at food banks has soared since the flu-like pathogen forced the US economy to close and resulted in more than 40 million new unemployment benefit claims.

An estimated one in four children, the equivalent of 18 million minors, could need food aid this year as a result of the epidemiological crisis – a 63-percent increase compared to 2018.

The analysis by Feeding America said the pandemic is taking its toll as the food insecurity in the US is already in a critical state, with at least 37 million living in households without adequate resources and consistent access to enough food for a healthy life.

Stressing that the economic impact and food insecurity would probably penetrate deepest in the southern US states, the analysis said more than 11 million people in Louisiana, Arkansas, Alabama, Mississippi, New Mexico, Texas and Tennessee are projected to suffer food insecurity in 2020.

In Mississippi, proportionately the worst-affected state before and since the pandemic, almost three-quarters of a million people could need food aid this year, including one in every three children.

“This pandemic continues to impact the lives and livelihoods of our neighbors nationwide, putting millions of additional people at risk of hunger while continuing to hurt people already familiar with hardship,” said Claire Babineaux-Fontenot, CEO of Feeding America.

According to data compiled by Johns Hopkins University, more than 100,000 people in the US have lost their lives as a result of the new coronavirus less than four months after the contagion was first reported in the country.

On average, about 1,400 people have died each day in the country this month, according to the tally of state and county data.

The viral disease, COVID-19, has killed more Americans than during the US Korean War, Vietnam War and the US war in Iraq from 2003 to 2011 combined.

The first coronavirus infection was reported in the state of Washington in late January and the first known death happened in early February.

Almost all 50 US states continue to reopen their frozen economy and emerge from more than two months of lockdowns under pressure from President Donald Trump, who is seeking reelection in November.

A report said last week that thousands of lives could have been saved if the Trump administration, which is under fire over mishandling the viral outbreak, had implemented lockdowns and social distancing measures just two weeks earlier.