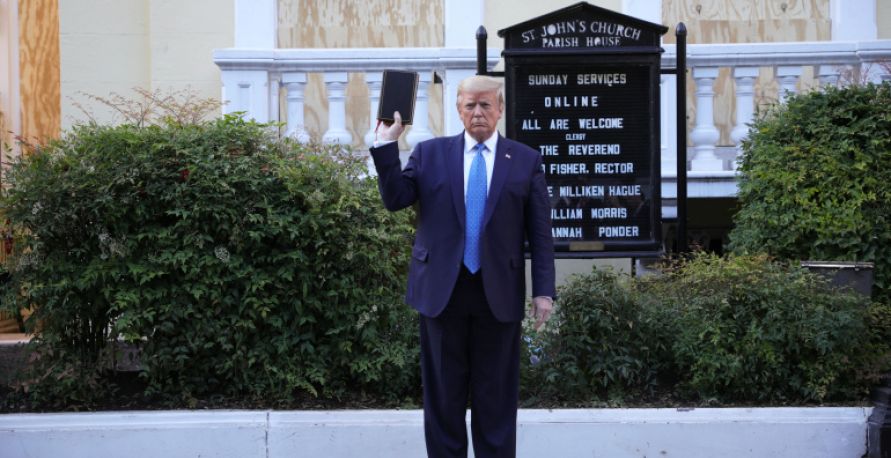 Facing the twin challenges of pandemic and protests, the US president is far behind in the polls

Four months ago Donald Trump’s plan to win re-election in November was pretty clear. It was to ask voters the same question Ronald Reagan had during his successful second-term campaign in 1984: Are you better off than four years ago?

America at the start of 2020 was enjoying unemployment at record lows and a stock market at record highs. It was the greatest US economy in history, Mr Trump liked to say. One, he believed, that would effectively send him back to the White House.

Scroll on to June and the electoral landscape is utterly transformed. Gone are the abundance of jobs, replaced by 40 million Americans filing for unemployment thanks to the coronavirus lockdowns. Businesses are shutting. Recession looms.

Covid-19, which in America has claimed almost 110,000 lives and been caught by 1.9 million people, has forced the spotlight on Mr Trump’s ability to steer the country through a crisis. And that was all before the streets broke out in violent protest this week.

The tumultuous few months have seen Joe Biden, the man all but certain to be the Democratic presidential nominee, build up a sizable poll lead over Mr Trump while sitting in his Delaware house basement self-isolating.

On a national level, Mr Biden is now seven percentage points ahead of Mr Trump, according to an average of reliable polls by Real Clear Politics. Barack Obama was around 2 points ahead at the same stage of his two successful presidential bids.

In the battleground states – where the election will actually be won or lost – it is just as bad.

The president has put on a brave face. He has denied trailing Mr Biden in public and fumed in private. “I’m not f****** losing to Joe Biden”, Mr Trump said incredulously to his campaign leaders according to widespread US media reports.

The political impact of protests, an eruption of anger at the country’s racial injustice that spread to more than 140 cities this week, remains to be seen. Early indications were not good for the president.

Close to 78 per cent said yes to the question “do you think the anger that led to these protests are justified” in one poll. Opinion about the protesters’ methods was much more split, but the nation appears to agree there is a major problem.

But that does not necessarily translate to criticism of Mr Trump. The decision to walk through a park strewn in graffiti after protesters were forced back by chemical gas and flash bangs horrified many in Washington.

Yet others in Mr Trump’s base praised the “law and order” president for reclaiming the streets. Mr Trump’s strategy for victory appears to have two planks now.

The first: delegitimise Mr Biden. The former US vice president has been painted in vicious wink-wink messages as senile, radical, lecherous, “racist” and out of touch by the Trump campaign and its surrogates.

The second goes back to the original plan. The economy has been in the deep freeze. If it can start thawing again in time, with lockdowns lifting and Americans heading back to work, then green shoots of recovery could be seen by November.

This hope, of an economic bounce back to revive his re-election prospects, was all too evident yesterday. Hearing the US unemployment figures actually dropped from April to May, with 2.5 million jobs being added, Mr Trump called an impromptu press address.

The statistics were “tremendous” and “shocking”, Mr Trump said, waxing lyrical about the jobs while barely mentioning the biggest anti-racism protests in half a century during his hour in the White House’s Rose Garden.

“Now we’re opening, we’re opening with a bang,” Mr Trump declared, adding of the economic growth he hopes is coming: “This is better than a V. This is a rockets hip.”

But the enthusiasm underscored the political peril. The president knows an economic miracle, of a surging recovery for which he can claim credit, is his best chance of re-election.

The problem? Voting day is less than five months away.

MEE: Yemenis do not need a fundraising conference, they need the war to end