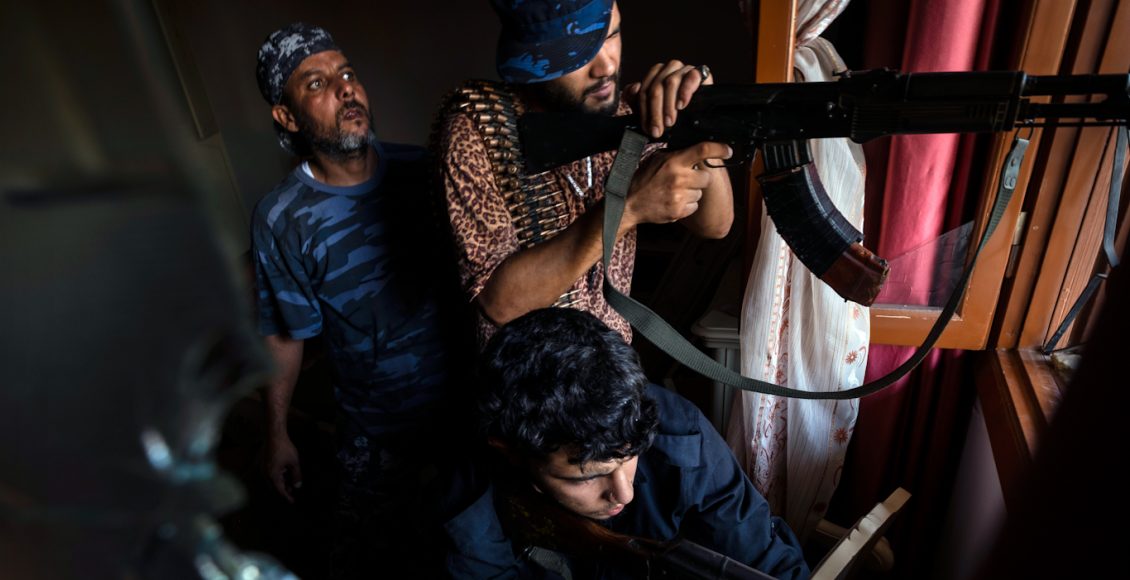 As focus begins to turn to developments in Libya and the foreign interference that plagues the Arab country, it seems that Turkey already has its eye elsewhere, preparing for military involvement in Yemen in a move that has sparked concern among Yemenis already struggling against an intervention led by Saudi Arabia, famine and most recently, COVID-19.

Informed sources in Aden and Taiz revealed to MintPress that a militia belonging to the Muslim Brotherhood-affiliated El-Eslah Party, the ideological and political ally of Turkish President Tayyip Erdogan, is already engaged in the latest round of fighting in Yemen’s southern provinces, particularly in Abyan and Shabwa.

The Turkish intervention, which extends to Marib – an oil-rich province located 173 kilometers to the northeast of Ansar Allah-controlled Sana’a, has so far been led by officers, experts, and training personnel, and has involved the delivery of weapons, including drones, for use by Turkish allies on the ground. The move paves the way for wider intervention in Yemen that would resemble Turkey’s role in Libya in favor of The Government of National Accord, which is currently battling General Khalifa Haftar’s forces for control over the country.

The Turkish officers and advisors in Yemen are lending comprehensive support to El-Eslah’s militants who have been fighting against the Southern Transitional Council (STC) in Abyan since April 26, when the STC imposed emergency rule in Aden and all southern governorates.

Beginning in 2018 and ‘19, dozens of Turkish officers and experts reportedly arrived in many Yemeni areas overlooking the Red Sea and Arabian Sea, particularly in Shabwa, Abyan, Socotra, al-Mahra and coastal Directorate of Mukha near the Bab al-Mandab Strait as well as to Marib. The officers reportedly entered Yemen as aid workers under pseudonyms using Yemeni passports issued illegally from the Yemeni passport headquarters in the governorates of Ma’rib, Taiz, and Al-Mahrah.

Recently, Ankara trained hundreds of Yemeni fighters in Turkey and in makeshift camps inside of Yemen. Moreover, Turkey recruited Libyan and Syrian mercenaries to fight in Yemen bty promising them high salaries to fight for the Muslim Brotherhood in the southern regions and along the western coast of Yemen, according to sources that spoke to MintPress.

One of those sources said that a group of mercenaries was supposed to enter the country last week in a Turkish plane carrying “aid and medicine related to coronavirus pandemic” but the Saudi-led coalition prevented the plane from landing at Aden’s airport. Now, sources say, Turkish intelligence and its allies in Yemen are working on a strategy to enter the country by pushing for eased travel restrictions under the guise of fighting coronavirus.

Yemeni politicians told MintPress that Turkey wants to reach the strategic port of Balhaf and secure for use as a hub to export gas and oil and to control the open coasts of the Arabian Sea and Bab al-Mandab Strait for later use as a gateway for Turkish intervention in the region. Turkish control in those areas would provide access to support and supply Turkish military bases in Somalia and Qatar.

This information provided to MintPress was confirmed by the London-based Syrian Observatory for Human Rights and Libyan Army spokesman Maj. Gen. Ahmed al-Masmari, who is recruiting Syrian and Lybian mercenaries with attractive salaries to fight with the Muslim Brotherhood in Yemen. At this point, both the Saudi-led Coalition and Turkey have exploited the Yemeni poor, recruiting them to fight in both Libya and Syria.

In Taiz, Turkey has opened training camps, the most important of which is located on the outskirts of the al-Hajariya Mountains near the Bab al-Mandab Strait and is run by Hamoud al-Mikhlafi who resides in Turkey and regularly visits Qatar. Al-Mikhlafi also established the “Hamad Camp” in the Jabal Habashi District. Shabwah, and Marib have also received Turkish support.

Turkey has been supporting Yemen’s El-Eslah Party, founded in 1990, since before the Saudi-led Coalition launched its offensive in Yemen in 2015. Similar to its support for the Government of Accord in Libya, El-Eslah has gained additional momentum in recent years given the power and money it has received from both Turkey and members of the Saudi-led coalition.

In a related event, high-ranking government officials from Turkey have traveled to Yemen to develop strategic interests and conclude agreements which could allow Turkey to resort to military force to protect its interests in the country. ln January 2019, Turkey’s deputy interior minister, Ismail Catakln traveled to Aden and held a meeting with high-ranking officials from the El-Eslah party, including Maeen Abdulmalik Saeed, who has been appointed “Prime Minister of Yemen” by ousted President Abdul Mansour al-Hadi on October 18, 2018.

According to a joint official statement, a number of agreements were concluded at the meeting involving humanitarian aid, health and education, economic and service projects, as well as an agreement to activate the joint committee between Yemen and Turkey. The most important agreement was a security and intelligence agreement between the Deputy Prime Minister and Minister of Interior Ahmed Al-Misri, a member of El-Eslah party.

This came months after “former Yemeni Transport Minister” Saleh al-Jabwani, a Reform Party affiliate, visited Turkey to sign agreements to hand over Yemeni ports, an agreement that was rejected by “Yemeni government officials” belonging to the Saudi-led coalition.

Prior to that, El-Eslah party officials and ministers have taken trips to Turkey to lobby AKP officials and encourage them to invest in Yemen’s transport sector and ports.

It is unlikely that Yemen is currently Turkey’s first priority in the region as it has already established a base in Djibouti and has a presence in both Somalia and Sudan, where Ankara has been granted temporary control of Sudan’s Suakin Island, providing it an important foothold into the Red Sea. But Turkey’s efforts in Yemen not only grant it expanded influence in the Bab al-Mandab Strait and the Red Sea but also with influence in the Arabian Sea.

From the perspective of Saudi Arabia and the United Arab Emirates, who are already at odds with Turkey, the presence of Turkish forces in Yemen could be a real threat to their interests. Moreover, a Turkish presence could serve as a very effective trump card for Turkey’s close ally Qatar, which has had a hostile relationship with these countries since the UAE, Saudi Arabia, Bahrain and Egypt broke ties with Doha in 2017. Furthermore, Turkey’s efforts, particularly in the Bab al-Mandeb Strait, are a threat to Egyptian national security. Egypt is also at odds with Turkey due to Ankara’s support for the Muslim Brotherhood and competition for resources in the Eastern Mediterranean.

The Turkish project in Yemen has given new zeal to the Saudi-led Coalition in its efforts to control Yemen’s islands. This week, Eritrean forces supported by the United Arab Emirates launched a military attack to take Yemen’s Hanish Islands in the Red Sea on Tuesday. The attack comes amid renewed tensions that have seen Yemenis that attempt to approach the Islands, even fishermen, arrested by Eritrean forces.

The proactive move by Eritrean President Isaias Afwerk is no surprise as Afwerkrejected previous Turkish efforts to establish a presence on the Sudanese island of Suakin. Eritrea briefly occupied the Hanish Islands in 1995 before retreating after the international arbitration court granted Yemen sovereignty over them.

A fiery clash in Yemen between the Saudi-led coalition and Turkey could be inevitable as the coalition seeks to dominate the Yemeni arena and eliminate Turkish interests there. It is also unlikely Turkey will abandon its allies and geostrategic ambitions in Yemen, as it refused to do in Libya or Syria. Unfortunately, the biggest losers in this scenario are the Yemeni people and their lands.

A quagmire for the would-be invader

Yemenis for their part are concerned about potential Turkish military intervention in their country. They say any additional foreign interference will complicate the situation and eliminate the hope of ending the conflict for dozens of years. Indeed, Yemen is already grappling with COVID-19, a collapsed healthcare system, and an ongoing Saudi-led coalition war and blockade.

However, Ansar Allah and its allies, as well as major parties in Yemen allied with the Saudi-led Coalition, have warned that Turkey’s military intervention in the country will be considered blatant aggression ad will be met by fierce military resistance. They urged the Turks to learn from the coalition’s failed experience and their own history which saw the Ottman Turks lose thousands of troops in Yemen during their ancient forays.

Yemeni Hussein al-Qwabari promised an armed struggle against any Turkish involvement in his country. He got upset when asked if he supports conditional Turkish intervention in Yemen. Al-Qwabari wons a home in Mathbah, which translates roughly into “The Alter.” Mathbah is so named for a famous incident in which thousands of Turkish soldiers were massacred by Yemeni resistance forces and al-Qwabari says he is enthusiastically prepared to repeat the experience of his grandparents in their armed struggle against the Turks.

In fact, the issue of Turkish interference in Yemen is a sensitive topics which provokes national fervor, especially among those old enough to remember the painful experiences of previous intrusions. The Ottoman Turkish Empire reduced Yemen, particularly the north, to a poor and backward vassal state.

There is good reason that Yemen has gained a reputation as a quagmire for would-be invaders. Yemen was not only conquered by the Ottomans Turks once but twice. The first time was in the sixteenth century under the pretext of thwarting Portuguese ambitions and saw Ottoman forces unable to capture the whole of Yemen. The Turks sent more than 80,000 soldiers to suppress local uprisings against foreign intervention but only 7,000 Turks returned home. The Turks returned in the nineteenth century and were again expelled in the 1910s.

However, many Yemeni activists belong to El-Eslah, including high-ranking officials in the party as well as journalists, have increased calls to make room for Turkey in Yemen, citing the gains made in Libya by groups supported by Turkey,

“We want Turkish intervention in Yemen,” Anis Mansour, the former Media attaché at the Yemeni embassy in Saudi Arabia said in a video posted from Turkey in which he spoke in front of the infamous Hagia Sophia. Mansour runs a network of social media activists and lives in Qatar. Supporters of Turkish intervention among Yemenis stems from the hope that Turkish military activities could stem Saudi and Emirati ambitions in the country and end the chaos and tragedy left by the coalition. They believe that the Turks can end the war and return the former government to Sana’a. Other Yemenis believe that Turkish intervention will be little more than an alternative to Saudi intervention and will do little to change the situation on the ground.

Yemenis collectively have not forgotten their experiences during both British and Turkish intervention. They are well-acquainted with outside forces that yearn for Yemen for its geographic location more than for its people. Today, they are experiencing another intervention, led by the richest countries in the world. They see neighbors that share a common language and faith do nothing while they are killed by hunger, disease, and incessant bombing.

This has ultimately caused an opening for Turkey as war-weary Yemenis may be amenable to a new foreign invader provided that their rights, sovereignty, and independence are respected.

Member of the Supreme Political Council “al-Houthi”: we are Ready for Dialogue with Saudi Arabia even on live broadcast

Hodeidah.. A tribal stand in 16 Kilo denouncing the burning of the Qur’an