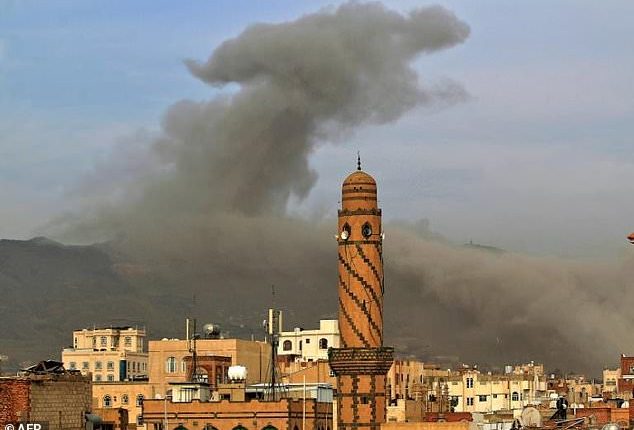 A report published by AFP on Monday, said that on top of war and the coronavirus pandemic, Yemen faces looming economic disaster as a crisis gripping its main benefactor Saudi Arabia dents remittances and leaves state coffers running dry.

Saudi Arabia may also be re-assessing its role as what observers call a “regional ATM” after its expensive intervention in Yemen produced few tangible gains, while a bitter power struggle between its anti-Houthi allies complicates its efforts to exit the conflict, the report said.

“The Saudis are no more (inclined) to pour unlimited millions and billions into Yemen,” a Western official tracking the kingdom’s engagement in Yemen said.

Analysts anticipate the Yemeni rial will weaken substantially this year as a $2 billion central bank deposit from Saudi Arabia in 2018 is nearly exhausted, a scenario that will diminish purchasing power and leave millions unable to afford basic food staples.

Less than $200 million of that amount remained in May, according to ACAPS, a nonprofit project of charities including the Norwegian Refugee Council.

“Yemen is looking increasingly economically vulnerable,” ACAPS said in a report, warning that a cessation of Saudi monetary support will lead to a “sharp devaluation” of the local currency.

Yemen is already gripped by what the UN calls the world’s worst humanitarian crisis, with tens of thousands killed and an estimated four million people displaced by war.

The World Bank says three-quarters of the population lives in poverty and last year the UN estimated 80 percent of Yemenis were at risk of hunger and disease.

A spokesman for the separatist Southern Transitional Council justified the seizure, saying it was meant to protect the currency from sliding further, according to AFP.

The feud “has created circumstances that will discourage Saudi Arabia from replenishing its foreign reserve support,” said the Sanaa Center for Strategic Studies.

Charities including Oxfam are also warning of an “unprecedented decline” in remittances to Yemen — a vital lifeline for millions as the cash-strapped government struggles to pay wages.

Oxfam said cash transfer providers in six of Yemen’s governorates had seen remittances plunge by up to 80 percent between January and April.

There are an estimated 1.6 million Yemenis in Saudi Arabia, where expat workers face sweeping job losses and salary cuts amid the worst economic crisis in decades.

Despite the financial pressure, the kingdom is unlikely to curtail its military spending in Yemen — estimated to be around $200 million a day —, the report said. Just days after Riyadh unveiled austerity measures in May, US officials said Boeing was awarded contracts worth $2.6 billion to supply the kingdom with more than 1,000 surface-to-air and anti-ship missiles.