Yemeni revolutionaries carried out large-scale attack deep in Saudi Arabia late Monday, targeting several targets across the Kingdom, while the crisis of oil derivatives shortage has intensified in the capital Sanaa and the provinces located under the control of the Supreme Political Council and the National Salvation Government, as emergency stocks approach to deplete.

“Yemeni Army carried out the largest attack ever on the Saudi capital, ‘Balance of Deterrence-4 Op’,” Saree said in a press conference adding that a large number of ballistic and winged missiles hit Saudi Defense Ministry, Intelligence Ministry, Salman airbase along with other military targets in Riyadh, Jizan and Najran, announcing that drones laden with explosives also took place in the operation adding that the operation “comes in retaliation to Saudi-led aggression and blockade on Yemen.”

This comes in light of the continuation of the aggression’s holding 15 oil derivative ships and preventing their entry to the port of Hodeidah , which threatens around 20 million Yemenis living in the capital Sanaa and other provinces with a major humanitarian catastrophe, whose risk increases with the outbreak of Corona epidemic (COVID-19) and the exceptional needs it imposes.

According to the Ministry of Health, the government public hospitals alone need a million and a half million liters of diesel per month, except for the rest of the hospitals and private health centers, while the Corona epidemic imposes exceptional activity in the service sectors, foremost of which are electricity, water and hygiene.

However, the United Nations and its envoy to Yemen show no interest in the appeals and calls launched by various vital sectors in Yemen for releasing the held fuel ships.

The Armed Forces Spokesperson, Brigadier General Yahya Sarie, said on Tuesday that a new long-range winged missile , would be revealed in due course, was used during the fourth deterrence balance operation that targeted military headquarters and centers in the Saudi aggression state.

The National Salvation Government’s spokesman Dhaifallah al-Shami, on Tuesday that the largest offensive operation against strategic military sites in the Saudi aggression state, came for response to the aggression’s crimes and its siege against the Yemeni people, appreciating the 4th deterrence balance operation’s success, and sending his congratulations to the leader of the revolution and the president of the Supreme Political Council. 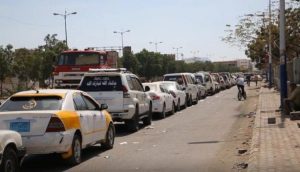 The spokesman stressed that “the operation will represent a turning point and be more painful if the aggression and the siege do not end on Yemen.”

The coalition of the US-Saudi aggression must deal seriously with the 4th Balanced Deterrence Operation, which indicates even more intense military operations, the head of the National Delegation Mohamed Abdulsalam said in Tuesday, writting on his Twitter page that “stopping the aggression and lifting the siege are a humanitarian and national goal for our oppressed Yemeni people,”.

During the war by the aggression ,over half of Yemen’s hospitals and clinics have been destroyed or closed, while around 80 percent of the 28 million-strong population is also dependen  on aid to survive in what the United Nations has called the world’s worst humanitarian crisis.

China Threatens ‘Appropriate Response’ to US over Media Curbs