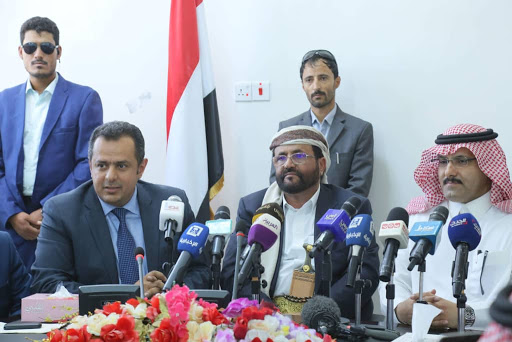 Hadi government in Riyadh was under great pressure led by the Saudi ambassador in Aden, Mohammed Al Jaber, to sign draft agreements between the two sides under the so-called Saudi Program for the Development and Reconstruction of Yemen headed by Al Jaber, and to sit with the Transitional Council (STC) to discuss the implementation of the Riyadh Agreement, as amended, that the Hadi government has so far refused, a report revealed on Friday.

Al-Araby Al-Jadeed newspaper said in its report that Saudi Arabia and its partner in the coalition of aggression (UAE) are heading for controlling a number of Yemeni oil, gas and transportation economic sites and supervision of some strategic regions and governorates under the agreements being signed with the pro-aggression government.

“After the capture of Socotra, observers see that the next role will be on fortunes such as oil, and other important strategic locations such as Al-Mahrah,” The London-based newspaper said.

The newspaper pointed to what a leaked document, issued by a ministry in the Hadi government, revealed about the terms of a planned agreement signed between the pro-aggression government and the Saudi program for the development and reconstruction of Yemen, according to which the program will be acquired through the Saudi national company Aramco on oil sectors of what is known as the “black triangle”, in the eastern regions of Yemen, located along three governorates, Marib, Al-Jawf and Shabwa, for 40 years.

Although the Hadi government denied this information and agreement that it described as fraudulent, well-informed sources assured Al-Araby Al-Jadeed that a government is under severe Saudi pressure related to the battles taking place in Abyan with the Emarati-backed STC, with the aim of bowing and responding to the projects adopted by the so-called Saudi Program for Development and the Reconstruction of Yemen.

The sources said that Saudi Arabia refuses to renew the dollar deposit in the Central Bank of Yemen, and requires for its renewal the acquiescence of the Hadi government to sit with the STC to discuss the implementation of the Riyadh agreement according to the revised Saudi formula and new data on the ground, after the expulsion of the Prime Minister of Hadi from Aden and the STC control over Aden with the support of Emirati forces and a Saudi green-light, and also after controlling Socotra.

“In addition to understanding about some agreements, such as the agreement to exploit and manage the fields of the eastern Yemeni oil fields, and grant it concessions the right to explore in the oil and gas sector 18 in Marib and Al-Jawf, and sector No. 4 in Shabwa,” the sources added.

Al-Araby Al-Jadeed had revealed last April, Hadi’s government’s intention to sell the largest Yemeni oil fields represented by sector 18 of the state company Safer in the eastern regions of Yemen, under difficult conditions that Yemen is going through due to the ongoing conflict in the country, along with international and domestic preoccupation with tackling the coronavirus and implementing broad precautions to combat it.

The newspaper also quoted an official in the Finance Ministry of Hadi’s government as saying that Yemen is going through a major financial deadlock after the dollar ran out of the Central Bank, and the country is facing difficult complications due to the rebellion of the UAE-backed Southern Transitional Council, which resulted in the seizure of tax, customs resources and government funds that were earmarked for the payment of civil servants salaries for last May.

The newspaper pointed out that this impasse may push the pro-aggression government to bow to Saudi pressure, which is managed by the Saudi ambassador and supervisor of the Yemeni economic file in the coalition, to sign the oil agreement and another agreement being prepared related to the extension of a pipeline for Saudi oil exports through the province of Mahra, adjacent to Oman, to the Arabian Sea.

The oil reserves in Yemen are estimated at 11.950 billion barrels, of which 4.788 billion barrels of oil can be extracted by primary and current methods. The total oil produced until December 2018, which is cumulative production for all sectors since 2015, amounts to about 2.9 billion barrels, while the total gas reserves reach about 18.283 trillion cubic feet.

The newspaper said that, ironically, given the intensification of the struggle over the country’s oil, the Yemenis face stifling and repeated fuel crises, as long lines of cars pile up in front of the stations, some of whom had to close after running out of available gasoline.