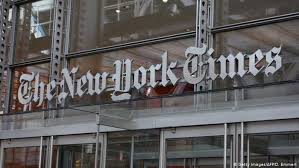 New York Times Is Instrument of US State-approved Propaganda

The New York Times isn’t and never was “the newspaper of record” except in its own mind.

It’s a national disgrace, a lying machine, an instrument of state-approved propaganda, notably on geopolitical issues.

It features US intelligence community press releases — rubbish masquerading as “all the news that’s fit to print” that’s unfit to read.

The late Chicago Sun Times reporter Mike Royko once remarked that “no self-respecting fish would (want to) be wrapped in a (Rupert) Murdoch paper.”

The same applies to the Times and other major US broadsheets, manipulating the public mind their mission, journalism the way it should be long ago abandoned.

Last week, the Times stooped to a new low even by its deplorable standards.

It falsely claimed “Russia secretly offered (the Taliban) bounties to kill US troops” in Afghanistan — citing the same US intelligence community that invented the thoroughly debunked Russian US election meddling hoax as its dubious source.

The Times: “American intelligence officials have concluded that a Russian military intelligence unit secretly offered bounties to Taliban-linked militants for killing coalition forces in Afghanistan — including targeting American troops — amid the peace talks to end the long-running war there, according to officials briefed on the matter (sic), adding:

“The United States concluded months ago that the Russian unit, which has been linked to assassination attempts and other covert operations in Europe intended to destabilize the West or take revenge on turncoats, had covertly offered rewards for successful attacks last year (sic).”

Not a shred of credible evidence backs the above rubbish.

Some hard truths suppressed by the Times:

Fact: The Russian Federation is the world’s leading proponent of world peace and stability.

Fact: It seeks cooperative relations with other countries, at war with none, threatening none — polar opposite how the US operates, waging perpetual war on humanity at home and abroad, an unparalleled threat to its survival.

No evidence suggests the validity of what the Times reported because none exists — what Times editors know, yet ignored, publishing Russophobic rubbish, egg all over their faces, another black eye to the broadsheet’s tarnished image beyond repair.

The same is likely true for at least most House and Senate members, notably anti-Trump Dems, both right wings of the one-party state supporting the US war machine.

Trump and the White House denied the fake news report, stressing no such intelligence community information given DJT.

The report “does not speak to the merit of the alleged intelligence but to the inaccuracy of The New York Times story, erroneously suggesting that…Trump was briefed on this matter.”

“We have paid attention to yet another fake news, released into media space by the US intelligence about Russian military intelligence’s alleged involvement in contracted killings of US troops in Afghanistan,” adding:

“This blunt story vividly illustrates the low intellectual abilities of US intelligence’s propaganda staff, who instead of making up something more elaborate has come up with such nonsense.”

“(O)n the other hand, what else one can expect from the intelligence that has miserably failed to succeed in the 20-year war in Afghanistan” — and all other US preemptive wars on nations threatening no one throughout the post-WW II period.

Conflict resolution talks with the Taliban haven’t succeeded because of unreasonable US demands.

Despite signing an agreement in February to end the forever war, it continues, perpetuated by fake news claims to falsely blame Taliban fighters for Pentagon/CIA high crimes.

For the US, Afghanistan is used as a land-based aircraft carrier against Russia, China and Iran.

Its resources are potentially worth trillions of dollars.

US occupation revived opium production — what the Taliban largely eradicated in the 1990s.

Used to produce heroin and other illicit opioids, Afghanistan produces most of the world supply — a US government-supported bonanza.

US occupation of Afghanistan is also about Washington’s aim to control Central Asia’s vast oil and gas resources.

What’s most important to explain is suppressed by establishment media, notably the Times since its mid-19th century founding — serving privileged interests over “all the news that’s fit to print,” a hollow slogan, notably in the modern era with the rarest of rare exceptions on issues mattering most.

The Times falsely claimed Trump was briefed on the alleged Russia-Taliban connection — what no credible evidence suggests exists other than perhaps efforts to end US forever war in Afghanistan.

Not according to US DNI (Director of National Intelligence) John Ratcliffe, saying:

“I have confirmed that neither the president nor the vice president were ever briefed on any intelligence alleged by the New York Times in its reporting,” adding:

The NYT report “and all other subsequent news reports about such an alleged briefing are inaccurate.”

Time and again, the US intelligence community, its political class, and establishment media lie, deceive, and otherwise betray the public trust.

Ahead of November’s presidential election, it’ll most likely rear its ugly head again in old and/or new forms.