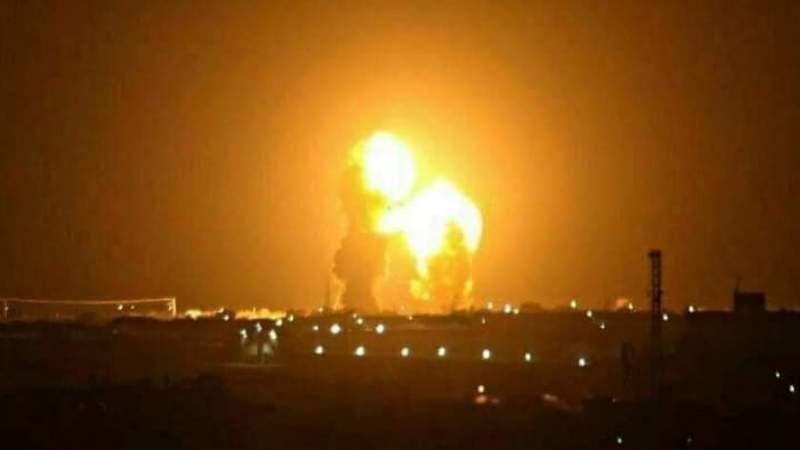 It is not the first time that the capital of the Saudi enemy or sensitive targets in the Saudi depth have been targeted. Al-Shaybah, Abqaiq and Khurais refineries and industrial cities in Dammam and Yanbu, military targets in Riyadh, such as Salman’s base and the Ministry of Defense had been previously targeted.

So what is new in the 4th Balanced Deterrence Operation that left Saudi Arabia confused, unable to respond in proportion to the size of the large operation and the humiliation it was subjected to?

On the other hand, how did the Yemeni Armed Forces succeed in delivering a new message to the Saudi enemy and the world using the same goals and the new tactic to announce the stage of great pain and a new stage of showcasing strength and humiliating the opponent, which Saudi Arabia had never been exposed to even from Iraq in the Desert Storm war?

Leaders of the Saudi regime stayed underground, not knowing when the Yemeni attack would stop, while the US ally was also unable, merely made a meager statement warning its citizens against leaving the fortified shelters.

Monday evening until Tuesday morning, attention remained directed towards Saudi Arabia and the upcoming news, consistent, coordinated and consecutive attacks on sensitive and sovereign targets in the Saudi capital, Riyadh, the Saudis themselves did not expect such a great attack. The Saudi media and its allies fell into a swamp of confusion, soon to announce what it claims to drop hostile targets and reassure its citizens, until it announces that Saudi defenses are looking for other targets, the scene ended with a huge explosion that shook the Saudi capital before sunrise and columns of smoke rising from more than one place In a dramatic scene, the attacker intended it to be the end of the longest night in which the Saudi regime lived in anticipation, terror and humiliation.

There are great indications for the 4th Balanced Deterrence Operation and the scenario that took place:

First: The Yemeni leadership declared itself operational, and with fire that it reached the stage of managing continuous offensive operations in the form of coordinated and consistent waves with each other, taking  long time as the attack lasted for more than 10 hours, multiple arms and weapons were used; drones, winged missiles, ballistic missiles and undisclosed weapon. The targets are sensitive military headquarters and bases in areas from Riyadh, Jizan and Najran.

Third: Ingenuity and accuracy in selecting targets and the weapon used, as well as organizing the launch and control of multiple weapons – winged and ballistic missiles and drones – which are different in terms of their speeds to reach each wave, including multiple weapons, and affect the overall goal of the attack wave in a simultaneous and accurate manner that guarantees documenting hitting the target by video, confusing the Saudi air defense systems.

Fourth: The military leadership superiority; despite the doubling of the air defense belts in Saudi Arabia, the Yemeni side proved its ability to penetrate it easily and manipulate it for hours. It put the American weapons and the American operator on Saudi soil in a place of embarrassment for the first time in front of its agents who were forced to pay billions to remain in order to manage the air defense systems that have been strengthened and systems hastily brought in from Greece and European countries.

As for the effects of the new force that the Yemenis showed in the face of the aggression on their country for six years and a harsh blockade, several aspects related to the timing of the process or necessitated its implementation can be addressed:

Politically: Observers consider that the Saudi regime is in a difficult situation even if it undertakes a massive response as it promotes it. After six years of war and spending millions, Yemenis reach this level of wide attack that put the kingdom at the mercy of the attackers for hours and the leaders fled to the ground after targeting the headquarters Leadership, including the palace of the king and his crown prince. This forces the countries of the world to take into account the new equation of powers, as Saudi Arabia is no longer in that position it was in when it launched the war on Yemen.

Internally: the Saudi regime lived a full night of humiliation in front of its people, that is under harsh taxes, silencing mouths, freedoms, and confiscating rights. The people in the kingdom, which suffers from taxation and demands to stop the war,  mocked at the regime, though the repressive policy prevented this from appearing, part of that was evident on social media despite the restrictions and the threat of imprisonment for decades.

Timing: The 4th Balanced Deterrence Operation was preceded by hundreds of Saudi hysterical raids to prevent the Army and Committees from advancing towards the city of Marib, where a regime of agents and mercenaries set up under the protection of the coalition.

The place where the coalition used for its clients, to be a shelter and capital for Daesh and Al-Qaeda is about to fall, after the painful message carried by the 4th Balanced Deterrence Operation. Riyadh’s messing to bring in al-Qaeda and Daesh from Syria and other countries to fight the Army and Committees, and the hysterical raids will not be without response. This is what the Saudi leadership and the mercenary leadership understand.

On the other hand, the 4th Balanced Deterrence Operation carried the credibility of the promise of the Leader of the Revolution, Sayyed Abdulmalik Badr Al-Din Al-Houthi, that the siege and the economic war will not remain without a military response.

The 4th Balanced Deterrence Operation also came during a crisis of oil derivatives in the liberated areas, after Saudi Arabia prevented oil ships from entering the port of Hodeidah for more than a month. There is a message that Riyadh understands in this direction that military strikes will force the Saudi enemy to give up playing with people’s livelihoods, lift the economic blockade, and ultimately stop the aggression.

Stopping the aggression is the option currently available to Saudi Arabia. Experts and journalists believe that all the options of the Saudi regime are bitter, it is in the way of submitting to stop the war and lift the siege.

They point out that the Yemeni side in general over the years of the war and the siege succeeded in managing the war game and absorbing the effects of the embargo more than the Saudi side, and that stopping the war is more in Saudi’s favor today than in the interest of the Yemeni side, which today is close to restoring control of a site of oil wealth and recovery from the hands of the coalition.

They affirm that the Yemenis have not yet revealed all their strength and cards even in the latest operation, unlike Saudi Arabia, which has exhausted everything in its possession. Thus, if the Saudi regime continues its war and siege, it is bent on losing its prestige more and more in front of its people and the world, and the results will not stop at the economic collapse, but rather may exceed the breakup of the entire kingdom.