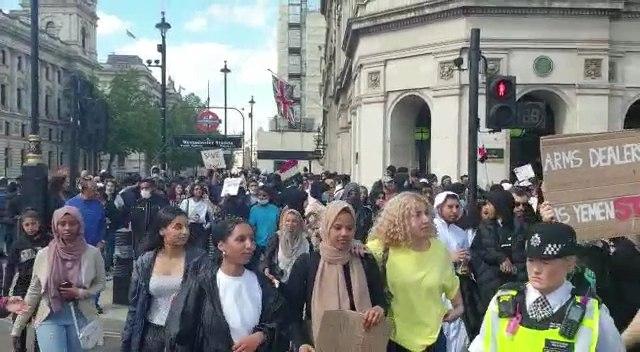 London: Protest against US-Saudi Aggression, Its Crimes in Yemen

On Sunday, the British capital, London, witnessed a protest by hundreds of British, Arab and Muslim demonstrators, denouncing the continuation of the Saudi-Emirati coalition war and its siege on Yemen.

Participants in the protest, in front of the BBC headquarters in the center of the British capital, London, called on the British government to intervene to stop the war that has been going on in Yemen for 5 years.

Protesters chanted in the largest demonstration against the alliance, slogans condemning the crimes of the US-Saudi-Emirati war coalition against the Yemenis and the siege imposed on them.

They also condemned support of the war on Yemen, calling on the British government to stop military dealings and arms deals with the UAE and Saudi Arabia, for their crimes in Yemen.