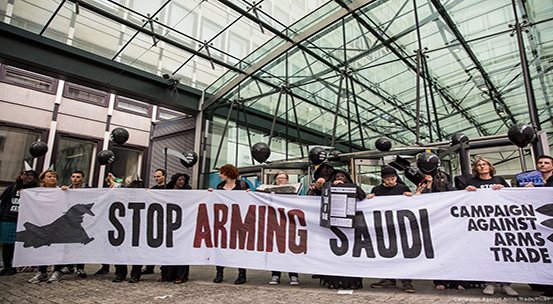 Britain has been “complicit” in the devastating Saudi led sea blockade of Yemen, a new investigation by Declassified UK has concluded in a new damning report, “Paralysing a nation”. The Saudi-led coalition received British training on naval tactics that are said to have been used to blockade Yemen, an embargo which UN experts have described as “unlawful”.

The Royal Navy’s role in the world’s worst humanitarian disaster since the Second World War and the full extent of the training provided by the UK to the Saudis and their allies, came to light following freedom of information requests by Declassified. The website, which monitors British military influence around the world, found extensive evidence of UK support for the Saudi-led sea blockade of Yemen.

Since the beginning of the Saudi-led offensive in Yemen in March 2015, the UK has licensed £5.3 billion ($6.6 billion) worth of arms to the kingdom. Shamefully, the Conservative government has continued the sale of arm and admitted to multiple breaches of a 2019 ban on new licences issued by the Court of Appeal.

An “Exclusive Economic Zone Protection Officer course” (EEZ) is amongst the various training and assistance provided by the British military, uncovered by the investigation, supported by Campaign Against Arms Trade (CAAT). Between September 2016 and March 2017, the Royal Navy provided training in policing the EEZ to Saudi and Emirate personnel. EEZ refers to the area of water that extends 200 miles off a country’s coast containing its fishing and resource rights.

Other courses include mobile sea training with the Saudi Navy, as well as “counter-smuggling” and “board and search” training for UAE personnel.

Despite reports of the terrible destruction inflicted on Yemen by the Saudi-led coalition, the UK ignored warnings from the Red Cross and Save the Children to continue training naval officers in the UAE, a key ally of Riyadh in its Yemen offensive.

By 2019, nearly five years of fighting and blockade had left nearly ten million Yemenis “one step away from famine”, according to the UN’s World Food Programme. UNICEF called on all warring parties “to allow humanitarian deliveries to children and their families wherever they are in the country”.

In June of the same year, the Court of Appeal ruled that UK arm sales to Saudi Arabia were unlawful as they failed to guarantee that British made weapons were not being used against civilians. The British government was also forced to issue an apology after breaching its own pledge not to license export of arms to the kingdom that could be used in the conflict.

This morning it was announced that the UK Government will resume the granting of new licences for arms sales to Saudi Arabia and the rest of the coalition that is bombing Yemen. CAAT has condemned the decision and announced that it is considering legal steps against Number 10.

“This is a disgraceful and morally bankrupt decision. The Saudi-led bombardment of Yemen has created the world’s worst humanitarian crisis, and the government itself admits that UK-made have played a central role on the bombing,” said Andrew Smith of CAAT, following the government’s announcement. “We will be considering this new decision with our lawyers, and will be exploring all options available to challenge it.”