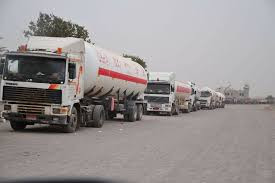 The Ministry of Oil and Minerals and the Yemeni Gas Company condemned the continued detention of 1,200 gas trailers in the areas of Al-Falaj, Al-Jarsha, Al-Juba, and Al-Manafil Al-Manafil in Marib province 23 days ago.

The statement called on all honorable people from the Marib province to intervene and release the detained gas trailers and allow their passage so that all the provinces be funded with their materials.

The statement also stressed that the continued detention of gas trailers will lead to an increase in the suffering of citizens and a crisis in domestic gas.