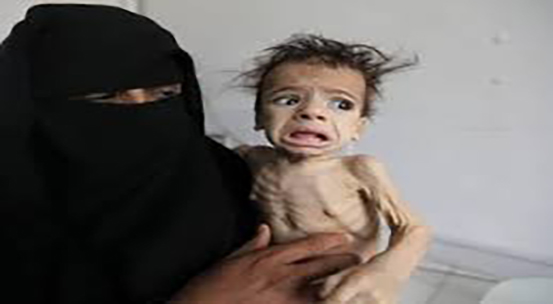 Hunger Gap Eats up Lies of UN Organizations in Yemen

Everyday, the suffering of Yemenis is exacerbated by dangerous deviations that affected the work of the United Nations organizations and the international civil organizations operating in the country.

Since the start of the war of the allied countries on Yemen, the legal aspect has been absent from the scene of events in the country, to show the injustice of the Yemeni people and the genocide crimes they are exposed to, either by bombing, or by starvation and economic war, while, in return, organizations working in the relief field have appeared and began to multiply, without any significant benefit in changing the living conditions of the people of Yemen.

Recently, the United Nations said that the humanitarian crisis in Yemen remains the worst in the world and more than 20 million people across the country are food insecure, half of them suffering extreme levels of hunger.

In a joint report with the Food and Agriculture Organization of the United Nations (FAO), the WFP warned that hunger threatens to soar to devastating levels in 25 countries, including Yemen, in the coming months due to the impact of the global COVID-19 pandemic.

The report stated that Yemen remains the most country in the world suffering from the largest food and humanitarian crisis, as evidenced by the fact that a total of 15.9 million people, i.e. 53% of the population analysed are severely food insecure in December 2018.

According to a follow up hotspot analysis, 1.2 million people in 29 accessible districts in Yemen were severely food insecure between July and September 2019.

In December 2019, WFP chief officer in Yemen Asif Ali Bhutto said that the WFP provides nearly $8 billion worth of aid annually to about 12 million people in Yemen.

Despite the astronomical numbers that the United Nations is talking about, only food aid, mostly expired and corrupt, has reached the Yemeni citizen, which was officially documented by the competent authorities in several regions of the governorates managed by the Supreme Political Council, in addition to the areas under Coalition control.

Between the numbers and the size of the food aid that the United Nations claims to provide to more than 50% of the Yemenis, a gap has arose, especially with the documentation of food aid that is not usable, which necessitated the intervention of the Supreme Political Council to develop and discuss an alternative mechanism to deliver aid to those who deserve it through cash payment after sessions led by member of the Supreme Political Council Mohammad Ali Al-Houthi and representatives of the National Salvation Government with representatives of the World Food Program.

Observers believe that the UN and its affiliated institutions are getting their sustenance with the blood of the Yemenis to achieve financial profits, pointing to documents revealed by the Supreme Council for the Management and Coordination of Humanitarian Affairs about the budget of one of the organizations, which has proven one of the scandals for the organizations in its operating budget after its approval of approximately 65% Salaries and petty cash, while what was distributed to citizens only 35%.

The huge annual budgets of the organizations are evidence of their trade in peoples and their transformation into tools of war away from humanity, as a result of the money they earn.

Escalation of US-Saudi Aggression and Silence of UN