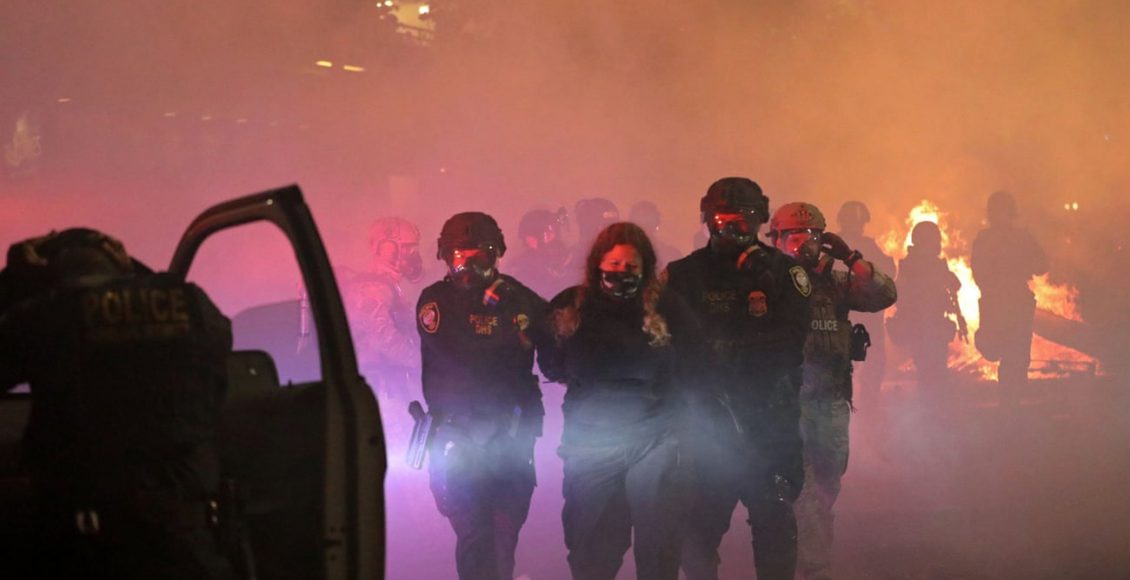 Several US mayors have urged Congress to halt President Donald Trump’s deployment of federal forces to their cities, saying the move has escalated tensions at anti-racism protests in the country.

“We call on Congress to pass legislation to make clear that these actions are unlawful and repugnant,” the Democratic mayors of Portland, Chicago, Seattle, Albuquerque, New Mexico; Kansas City, Missouri and Washington DC, wrote in a letter to the leaders of both parties in the Senate and House of Representatives.

The request came on the same day the US attorney for Oregon announced the arrest of 22 people on charges stemming from clashes with federal and local police at the federal courthouse in Portland, Reuters said.

The deployment of federal agents to Portland and Oregon has drawn sharp criticism after they whisked away demonstrators in unmarked cars, beat a US Navy veteran and tear-gassed activist mothers and Portland’s mayor.

The US Black Lives Matter protests, which erupted after the police killing of African American George Floyd in Minneapolis in May, surged over the weekend, with an escalation in violence and the appearance of white supremacists and an armed Black militia.

One person was shot dead at an Austin, Texas, protest on Saturday and two others were struck by gunfire at demonstration in Aurora, Colorado on Sunday.

45 people were arrested in Seattle during a protest over the deployment of federal agents to Portland and a standby force to Seattle. Protesters in Los Angeles clashed with officers in front of the city’s federal courthouse.

Hundreds of people have so far been arrested for participating in the Black lives Matter protests across the United States since late May.

A Black militia group marched through Louisville, Kentucky, on Saturday demanding justice for Breonna Taylor, a Black woman killed by police who burst into her apartment.

“We celebrate passionate protest but Oaklanders need to know that when they attend protests after dark they may be providing cover for agitators who are more intent on stoking civil unrest than advancing racial justice,” Schaaf said in a statement.

She argued agitators in Oakland gave Trump the “images he wants” to justify sending federal agents into US cities, saying they make it easier for the Trump administration to vilify otherwise peaceful protesters.

“Vandalizing our downtown gives Donald Trump the images he wants and the justification he seeks to send federal troops into American cities,” she said. “We can’t be fooled and play into his twisted campaign strategy.”

Trump has said that federal forces are necessary to restore order to cities such as Portland, praising the role of the agents during the rallies.

US Attorney General to defend use of federal agents

Attorney General William Barr will defend the Justice Department’s use of federal agents to crack down on protests in Portland in a congressional testimony on Tuesday, saying attacks on the federal courthouse there represent “an assault on the government of the United States.”

“The most basic responsibility of government is to ensure the rule of law, so that people can live their lives safely and without fear. The Justice Department will continue working to meet that solemn responsibility,” Barr said in prepared remarks before the Democratic-controlled House of Representatives Judiciary Committee.

Barr has faced heavy scrutiny from Democrats since the beginning of his tenure last February, starting with his decision to selectively release a summary of Special Counsel Robert Mueller’s report on Russian interference in the 2016 presidential election.

Barr claimed, “Trump has not attempted to interfere” in any criminal cases.

He will also accuse Democrats of falsely “conjuring up a narrative that I am simply the president’s factotum who disposes of criminal cases according to his instructions.”

The US Justice Department faces criticism for its role in sending federal agents to forcibly disperse protesters in Portland and Washington DC.

WHO: Corona Outbreak Is The World’s Most Serious Emergency, And The Pandemic Is Accelerating